Children’s hospital delayed until at least 2019

Project delayed by three years since commitment in Programme for Government 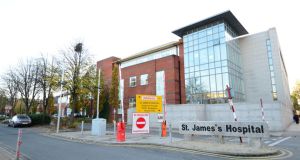 Further delays could arise from the planning process; a report last year categorised the planning risk on the St James’s site as “moderate”. Photograph: Bryan O’Brien

The new national children’s hospital is unlikely to be ready until 2019 “at the earliest”, according to sources involved in planning the project.

This is three years later than promised in the programme for government and at least a year later than predicted by Minister for Health James Reilly when he announced last November that the project was being awarded to St James’s Hospital.

In the six months since this announcement was made nothing visible has happened to advance the project apart from Dr Reilly’s decision to replace the outgoing board with a group of senior officials from his department.

However, sources say the tender document for the Government’s flagship capital project is nearing completion, and a number of key appointments will shortly be advertised. These include a programme manager, similar in role to a chief executive, and a project manager who will have direct responsibility for overseeing construction.

Dr Reilly told the Dáil this week he aimed to have a new design team in place within six months and to secure planning permission by December 2014. By the start of 2015, St James’s will have cleared the intended site in preparation for construction.

Construction of the hospital is expected to take three to five years, meaning the building would not be ready for use until the start of 2019 at the earliest, or 2021 at the latest.

Further delays could arise from the planning process; a report last year categorised the planning risk on the St James’s site as “moderate”.

The programme for government contains a specific commitment to build the hospital, and Ministers originally hoped the much-delayed project would be ready in time for the centenary of the 1916 Rising and before the next election. However, the decision by An Bord Pleanála to reject the original plans to build the hospital at the Mater hospital in Dublin made this deadline unlikely, and further delays have ensured it is unattainable.


Restructure
Dr Reilly intends to restructure the existing National Paediatric Hospital Development Board so that its sole focus is the design and construction of the building. He says a chairman, who has not been named, has been found for this board. However, the statutory instrument to effect this change will not be ready until the end of this year.

The three existing children’s hospitals – at Temple Street, Crumlin and Tallaght – will be merged into the new hospital when it is built. Work is continuing on merging the boards of these three hospitals in a new group under the chairmanship of Prof Jim Browne, president of NUI Galway.

Sinn Féin health spokesman Caoimhghín Ó Caoláin described the delay as hugely disappointing. He said Dr Reilly should speed up the process and should ensure the existing children’s hospitals were properly resourced in the years before completion.