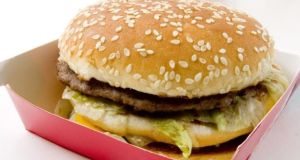 Children associate junk food with having a better time, while watching TV adverts for unhealthy food makes them feel hungry, a new report has found.

The study, for Cancer Research UK, was carried out in four primary schools in England and two in Scotland, among 137 children aged eight to 12.

Small groups were shown two adverts for foods high in fat, sugar or salt and discussions were held about them and about eating in general.

The results suggest that, despite current rules saying junk food cannot be promoted during children’s TV shows, youngsters are heavily influenced by the adverts at other times of day.

Pupils watched family programmes between around 7pm and 8pm each day and also on weekends, which researchers said exposes “the loophole in the current legislation”.

TV advertising also results in children pestering their parents that can lead to the purchase of junk food, the report said.

Some of the children in the study described unhealthy food as “addictive” while one said a TV advert for takeaway pizza made him want to “lick the screen.”

Others loved the fact people and characters in the adverts were having a good time.

Researchers found the children had a good level of nutritional knowledge but adverts tempted them into eating unhealthy foods.

They also reported children saying the adverts made them hungry and wanting to eat junk food.

In the longer term, children remembered the adverts, bright colours and packaging, leading to the possibility they would ask for specific products in supermarkets.

Currently, around 30 per cent of children in England aged two to 15 are overweight or obese, while the figure is 34 per cent in Wales and 31 per cent in Scotland.

Cancer Research UK is among several charities calling for a ban on junk food advertising on TV before the 9pm watershed.

Dr Jyotsna Vohra, head of the Policy Research Centre for Cancer Prevention at Cancer Research UK, said: “It’s worrying to hear that children associate junk food with having a better time and it’s evident from the discussions that advertising can influence how they eat.

“Most kids said that adverts made them feel hungry and in many cases it had a direct effect, with some children more likely to plead, nag or beg their parents after seeing an advert.”

“The rise in children’s obesity is a huge concern and a growing epidemic. There must be no delay in taking action. We know that obese children are around five times more likely to be obese adults, and obese adults are more likely to develop cancer.”

Vaccines regulator would take AstraZeneca Covid-19 jab if offered it