Organ donation the ‘biggest gift anyone can ever give’ 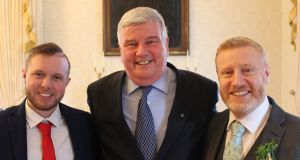 David Crosby was 40 years old when he was given a year and a half to live after developing idiopathic pulmonary fibrosis, a chronic lung disease. In March 2016 he had a successful double lung transplant, and has since gone on to finish a marathon.

David was one of several members of the public who had benefited from organ donation, attending a ceremony on St Patrick’s Day held by President Michael D Higgins at Áras an Uachtaráin.

“I had three small children, it was devastating news, they gave me a year and a half to live,” David said.

After his successful transplant, David committed to running a marathon. Along with a group of friends he ran the New York city marathon in six hours and fifteen minutes last year, and raised thousands for charity in the process.

“I think about my donor, who took the brave decision to help me, I’ll never get to meet that person unfortunately, it’s the biggest gift anyone can ever give to anyone else,” he said.

David, who lives in Co Cavan, has set his sights on running another five marathons in the near future.

Luke Doherty (27) also had a double lung transplant, after one of his lungs collapsed in January 2016. Luke was diagnosed with cystic fibrosis when he was a child, but never let the disease get in the way of his ambition to work in the fitness industry.

While on the waiting list for an organ transplant he was still training regularly, despite operating on one lung. “I ended up getting an infection and because I had no reserve it was a bit scary,” he said.

Post-transplant he is due to complete a bachelor of science course in Setanta College in two months time. Luke plans to start work as a personal trainer before moving on to work with sports teams providing strength and conditioning training.

An opt-out system for organ donation should be introduced in Ireland, he said, as “most people don’t even think about it until something happens to someone they know”.

Speaking at the reception on Saturday, President Higgins said organ donation was an “act of incredible solidarity”.

“When faced with the numbing realisation that a loved one will not survive an illness or an accident, it is most humbling to consider that generosity of spirit that pierces through those darkest days of a personal tragedy,” he said.

President Higgins said he would like to see donation rates in Ireland increase, and conversations among families on the topic were “critical”, to inform the decisions the recently bereaved made following the death of a loved one.