Ahead of World No Tobacco Day, lobby group urges prompt introduction of legislation 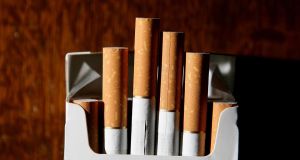 Ireland was the first country to introduce a plan for plain tobacco packaging in 2014, but delays in developing the relevant legislation mean it will not come into effect until 2017 at the earliest. File photograph: Martin Rickett/PA Wire

Anti-tobacco lobby group ASH Ireland has criticised delays to implementing plain packaging legislation for cigarettes ahead of World No Tobacco Day on Tuesday, May 31st.

It was initially envisaged that plain packaging for tobacco products would be introduced on May 20th to coincide with new European Commission (EC) rules on tobacco packaging.

Ireland was the first country to introduce a plan for plain packaging in 2014, but delays in developing the relevant legislation mean it will not come into effect until 2017 at the earliest.

In the meantime Ireland has been overtaken by the UK, which followed through with its commitment to introducing plain packaging for cigarette products on May 20th.

The protracted process of forming the new Government in Ireland was at least partially responsible for the delayed implementation here, and anti-smoking groups fear tobacco industry lobbyists will seize on the opportunity to introduce new legal challenges.

“We strongly urge the Government to prioritise the roll-out of this legislation in Ireland. The relevant Bill has been published and the legislation was due to come into effect on the 20th of May,” said ASH Ireland chairman Dr Patrick Doorley.

He continued: “This delay causes some concern, as the tobacco industry had made its intentions clear – it will do everything possible to thwart this health legislation.

“It is well established that the tobacco industry spend billions of euro annually on sponsorship, advertising and promotion of its lethal product - and pack design is central to the success of this massive drive to market and sell a product that kills one in two of its users.”

Dr Doorley added that close to 6,000 Irish citizens die of a smoking-related illness each year, calling it a “dreadful statistic”.

Ireland was one of a number of EU countries to transpose the EC Tobacco Products Directive into national law earlier this year, paving the way for increased health warnings on packaging.