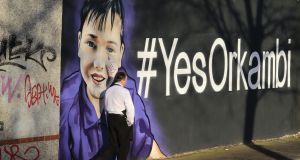 Orkambi graffiti on Charlemont Place at the side of the Grand Canal, Dublin. Photograph: Nick Bradshaw

About 900 people in Ireland with cystic fibrosis (CF) now have access to the drugs Orkambi and Kalydeco after an agreement with the HSE and drug maker Vertex came into force.

Vertex and the HSE earlier this year reached an agreement to fund Orkambi for the 500 people in Ireland with CF who are aged over 12.

The agreement also expands access to another drug, Kalydeco, to children aged two to five and to people aged 18 and older who have an R117H mutation.

CF is an inherited chronic disease that affects the lungs and digestive system of about 1,200 children and adults in Ireland. A defective gene and its protein product cause the body to produce unusually thick, sticky mucus that clogs the lungs and leads to life-threatening lung infections and obstructs the pancreas and stops natural enzymes from helping the body break down and absorb food.

The Government’s decision to provide the drugs, described by campaigners as potentially life-saving, for more than 900 CF patients is likely to cost more than €650 million over the next decade.

The price agreed by Cabinet includes €400 million on Orkambi. The balance is accounted for by the provision of Kalydeco as well as access to other as yet undeveloped drugs from Vertex Pharmaceuticals.

“We are pleased that these additional Irish CF patients will finally join the thousands of others around the world who are already benefitting from Orkambi and Kalydeco,” said Simon Bedson, senior vice president at Vertex.

“We thank the leaders in Ireland for working with us toward an innovative reimbursement agreement that provides access to these important medicines and also recognises the need for Vertex’s continued investment in the research and development of new medicines for those people with CF, many of whom are still waiting for a treatment for the underlying cause of the disease.”