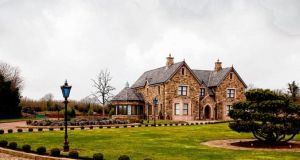 Gardaí have been unable to conduct a substantive interview with property developer Kevin McGeever to date due to health issues, but they hope to be able to interview him as early as today.

Mr McGeever was found by two people wandering on the road between Swanlinbar and Ballinamore in Co Leitrim last Tuesday night.

He was in a dishevelled state and was disorientated, with the word “thief” inked on his forehead. His only possession was a new mobile phone with one number on it.

He claimed to have been kidnapped from his home in Craughwell, Co Galway on May 27th last year and held in a dark room by kidnappers before being driven to a mystery location and released.

A Garda spokesman said Mr McGeever remained under observation in Mullingar General Hospital and was being questioned by detectives.

The mystery as to how and why he was kidnapped remains.

In Craughwell the grounds of Mr McGeever’s home, which he named Nirvana, are beautifully maintained despite its owner’s absence. There are turquoise blue Victorian-style lamps everywhere, a large orangery, a helicopter pad and stables at the back.

All the blinds, though, are down in the house, and the intercom is out of service.

Locals say nobody has lived there for quite a while. Nirvana was Mr McGeever’s Irish home when he was not wheeling and dealing in Dubai where his businesses were based. He lived there with his Irish partner who reported him missing to gardaí in May last year.

Since Mr McGeever’s mysterious disappearance and even more mysterious reappearance last week, Nirvana has become something of a tourist attraction. “Savage house,” said one teenager who drove past it slowly taking photographs from the window of his car.

The date of its construction is on the porch. It is 2006, the zenith of the Celtic Tiger.

The neighbour said Mr McGeever had his heart set on buying film director John Huston’s old Craughwell mansion St Cleran’s, but when that fell through he bought this house instead.

“He fell in love with the area. It’s very much the horsey set around here and that’s why he built the stables at the back,” he said. Once the house was bought, he set about tearing up the paving and changing the hedge outside the house for an ornate wall.

He had plans to install an artificial lake with swans at the back but it never came to fruition.

The neighbour described Mr McGeever as an “absolutely lovely guy, I wouldn’t have a bad word to say about him” and noted he spent millions on a home he lived in only intermittently.

“I’ve been in the house. I’ve had drinks with himself and his partner Siobhán. They are lovely people. They would entertain the room. I wouldn’t say they were unassuming, but they were very good company. You could easily sit with them for hours. He was a very learned guy and very educated.

“He told me about businesses in Dubai. Before he disappeared he told me that he bought an airline.”

On the internet there is a website for a firm called KMM Aviation Worldwide which trades in aircraft and lists Kevin McGeever as its chief executive.

The neighbour said he heard about Mr McGeever’s disappearance from local gardaí a while after he disappeared. “It is a bit of a mystery. These high-fliers, we don’t know their movements. We just assumed he was away on business.”

One4all customers leave €219m unused on cards 13:38
All nursing home residents to get first vaccination jab by next Sunday – Minister for Health 13:30
Alexei Navalny to fly into Moscow in challenge to Putin 13:09
Call records reveal fear and anxiety of older people during Level 5 12:46
Britain calls for concerns over Ugandan election to be investigated 11:55