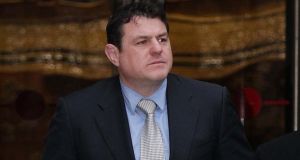 19/02/14 Ex Ireland and Leinster player Reg gie Corrigan: seeking compensation for the loss of his position as manner in which he ceased to be departed as scrum coach with Leinster in 2012 pictured at the Employments Appeals Tribunal, Adelaide Road, Dublin today . Photograph: Stephen Collins/Collins Photos

Former Irish international rugby player Reg Corrigan lost his coaching position with the Leinster branch of the IRFU in breach of employment legislation, he has claimed at an Employment Appeals Tribunal hearing.

Mr Corrigan is seeking compensation for the loss of his position as scrum coach with Leinster in 2012.

In a short opening statement his counsel, Frank Drumm, told the tribunal Mr Corrigan was unfairly dealt with and his dismissal was without recourse to proper procedure.

Claire Bruton, for the Leinster branch of the IRFU, said Mr Corrigan had been employed as a scrum coach for the professional game in the province on a two-year contract with a 12-month break clause. This meant he coached professional players for the Leinster team. In her opening statement she said that following a restructuring in 2010 Mr Corrigan was given a second fixed-term contract with a six-week notice period and given responsibility for coaching the “domestic” game in Leinster. This meant he dealt with amateur players in rugby clubs and schools.


Restructuring
She explained that in April 2012 , and following restructuring, the decision was taken to end the position. Mr Corrigan, she said, was paid until the end of July 2012. He was not replaced at the time and has not been replaced since.

Philip Lawlor, Mr Corrigan’s former line manager who has held a series of positions with Leinster over a 20-year period, said Leinster rugby was organisationally divided between the professional team and the “domestic” game involving clubs and schools.


Scrum coach
Funding for the domestic game, he explained, came from the IRFU with some administration functions paid for by the Leinster branch. He said Mr Corrigan was scrum coach to the professional side under Michael Cheika.

However, when Joe Schmidt became head coach in the 2010-11 season he brought in new consultants including Greg Feek, a scrum coach.

Mr Lawlor said that given Mr Feek’s speciality Mr Corrigan was given a new contract to provide a new “scrum culture” within the domestic game over a two-year timeframe. The difference in salary between the two contracts was €20,000, he said. Mr Corrigan began in his new role working with the 75 rugby clubs and 22 rugby-playing schools in Leinster.

Restructuring was forced upon Leinster in 2009-10, Mr Lawlor said, due to the economic climate, and the province received €860,000 in funding from the IRFU – down from more than €1 million. He said a decision was later taken by himself, Leinster chief executive Mick Dawson, Joe Schmidt and Colm McEntee, academy manager at Leinster, to dispense with Mr Corrigan’s services.

The next hearing of the case will be on May 30th.