Fishermen say seals must be culled to conserve fish stocks 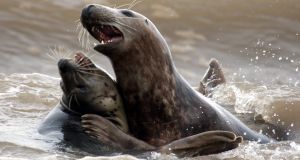 FISHERMEN IN Co Kerry are stepping up calls for a cull of the local grey seal population, but this is opposed by the National Parks and Wildlife Service.

The fishermen, from Kenmare Bay to the Maherees, say the seals are now over-protected, there are too many and they are undoing salmon conservation measures.

It is estimated grey seals eat some 10kg of fish a day.

Dingle fishermen are particularly vocal on the issue, and say tonnes of hake and pollock are being depleted.

Fishermen say those worst affected are fishermen who use gillnets, which are placed on the sea bed near the coast. They say when the nets are hauled up, practically every fish has been eaten.

Skipper of the Atlantic Fisher Johnny O’Connor , who fishes with gillnets off Dingle, said the damage was costing his vessel up to €2,000 a day.

Other fishermen say the conservation measures to protect salmon are pointless because the seals are feeding on the spring salmon runs in Castlemaine harbour and Kenmare Bay.

There are growing fears the seals will be culled illegally if something is not done officially.

In 2004 there was shock after the killing of 60 seal pups on the uninhabited Beginish Island, one of the Blasket Islands. Most had been shot. The suspicion fell on fishermen, the traditional enemy of the seal. No one was ever charged

Grey seals favour offshore islands and exposed and inaccessible coastlines as breeding sites, where the new pups remain ashore for several weeks prior to weaning, according to information from grey seal project Seal Track.

Seal Track is a research programme being conducted by UCC, which tracks the movement of seals between Ireland and Scotland.

The Great Blasket is one of the largest breeding colonies for seals in Ireland, and locals say that far from the depleted population of 2003, there are now 1,200 grey seals in the area.

In 2003, surveys by seal conservationists found there were only about 400 resident grey seals on the Blaskets, the bulk of these on Great Blasket. This was down from 700 in 1998.

Locals say last summer a diver was attacked by a seal off the Blasket. They claim the seal had become aggressive because of hunger.

However, the calls for a cull are likely to fall on deaf ears. A spokesman for the National Parks and Wildlife Service this weekend ruled out a cull.

“There is no question of a cull. These seals are protected under EU legislation. To kill them is illegal.”