Eurovision saves best for last as Ireland to close contest 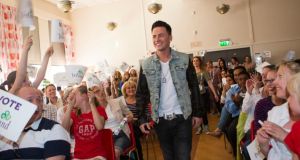 Ireland will be the 26th and final country to perform tonight in the Eurovision Song Contest final.

For the first time this year, the running order was determined by the local Swedish television producers rather than by the artists drawing lots.

It seems clear they felt that Ireland’s infectious, upbeat number Only Love Survives would end the production on a high note.

Statistics certainly indicate that singing in the second half of the competition helps: since 2004, only one winner in the semi-finals and finals has competed in the first half of the running order.

It is less clear whether performing last brings any particular benefits, but Dolan may pick up votes from viewers who tune in late because they are most interested in the voting period.

That being said, viewers will get a particular treat if they tune in on time tonight to see the opening act, which features a new element this year reminiscent of the Olympic Parade of Nations.

Dolan and his supporting performers had a long day yesterday, with two dress rehearsals, including an evening performance viewed by juries who decide 50 per cent of the result. “There’s a great vibe backstage,” said Dolan, “because there are so many more countries than were in our semi final”.

However, there is less of a sense among the Eurovision media corps that we’ll see a landslide victory as with last year’s Swedish winner, Euphoria .

Norway’s electro-pop number I Feed You My Love is rated second most likely to win, followed by the Ukrainian song Gravity , which combines musical theatre and Disney song influences. These are followed by Azerbaijan’s cleverly staged Hold Me and Russia’s uplifting power ballad What if We .

All of these have an outside chance of winning. Neither can we fully discount the chances of Italy’s stylish ballad L’essenziale . Since it re-entered the contest three years ago after a 14-year hiatus, Italy’s entries have scored extremely well with the expert juries.