The world is at risk of “crossing multiple tipping points”, triggering dangerous global warming, if average surface temperatures rise by 4 degrees Celsius or more, according to the UN’s Intergovernmental Panel on Climate Change.

The chairman of the IPCC warns that climate change could have implications for human security as he calls the findings of new UN report 'profound'. Video: Reuters 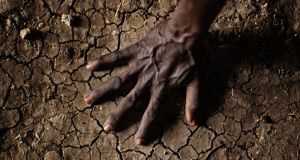 A man places his hand on the parched soil in the Greater Upper Nile region of South Sudan in 2012. Future heatwaves could threaten key global food crops if climate change is not addressed. Photograph: PA

The world is at risk of “crossing multiple tipping points”, triggering dangerous global warming, if average surface temperatures rise by 4 degrees Celsius or more, according to the UN’s Intergovernmental Panel on Climate Change (IPCC).

In the second volume of its Fifth Assessment Report, released yesterday, the IPCC warns of “severe and widespread impacts on unique and threatened systems, substantial species extinction [and] large risks to global and regional food security”.

Although the precise levels of warming sufficient to trigger tipping points – thresholds for abrupt and irreversible change – “remain uncertain”, it says the risk of crossing multiple tipping points in the Earth’s climate system increases with rising temperatures.

The IPCC working group, comprising more than 300 scientific authors from 70 countries, says high temperatures and humidity would compromise normal human activities, including growing food or working outdoors in some areas for parts of the year.

The report is the second in a four-part series intended to guide governments across the world that have promised to agree a pact next year to slow climate change.

Human health
The report confirms that climate change is being felt “on all continents and across the oceans...Observed impacts have already affected agriculture, human health, ecosystems on land and in the oceans, water supplies and some people’s livelihoods.”

It says the most striking feature of these observed impacts is that they are “occurring from the tropics to the poles, from small islands to large continents, and from the wealthiest countries to the poorest” – although it is the poorest who will be hardest hit.

“Nobody on this planet is going to be untouched by the impacts of climate change,” IPCC chairman Dr Rajendra Pachauri told a press conference in Yokohama, Japan, where a 44-page “summary for policymakers” was released.

It warns that some risks of climate change are “considerable” even if warming is capped at 2 degrees – currently the international goal. For example, it would have an impact on human health, mainly by exacerbating heath problems that already exist.

Heatwaves and fires
“Throughout the 21st century climate change is expected to lead to increases in ill health in many regions and especially in developing countries with low income [with a] greater likelihood of injury, disease, and death due to more intense heatwaves and fires.”

There was also an increased likelihood of under-nutrition resulting from lower food production in poor regions and increased risks from water-borne diseases. The magnitude and severity of such negative impacts would “increasingly outweigh” any positives.

“It is true that we can’t find many benefits of climate change, and I believe it’s because there aren’t many benefits, even though we tried really hard to find them,” working group co-chairman Dr Chris Field said. In many places, there would be “widespread negative impacts”, he added.

“In many cases we are not prepared for the climate-related risks that we already face. Investments in better preparation can pay dividends.”