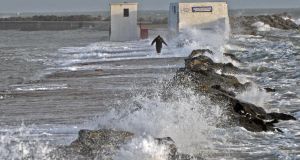 A solitary figure battles with high wind and waves , on the Great South Wall, at Poolbeg last December. Insurance claims relating to storm damage and flooding last winter was about €156 million, according to the Irish Insurance Federation. Photograph: Eric Luke/The Irish Times

The cost of insurance claims arising from damage caused by storms and flooding last winter is estimated at €156 million, according to the Irish Insurance Federation (IIF).

It said last February’s storms, including Storm Darwin, cost insurers €110 million in claims, while the storms during the Christmas period in late 2013 resulted in €46 million in claims costs to insurers.

Storm Darwin ripped through the country on February 12th of this year, leaving 260,000 homes without electricity and causing widespread damage to properties and businesses around the country.

This winter’s storms were not the most expensive weather events in recent years.

Insurer FBD holdings has increased its estimate of the cost of weather-related claims arising out of last winter’s flooding by €4 million to €44million.

Earlier this month, three beaches lost their Blue Flag status because of ongoing repair works following the winter storms. Bertra and Mulranny beaches in Co Mayo, Rossbeigh beach in Co Kerry, and Miltown Malbay and Spanish Point beaches in Co Clare missed out on the awards in recognition of high water quality, safety provision and infrastructure across the Irish coastline.

“That’s what it was like,” said Mr Arkins. “We had damage that you couldn’t imagine. Fair play to our staff on the ground - they did as much as they could to clean up after that and to get them ready.”

“We’ve actually got an estimate of damage in total of over €15 million for this year,” he said.

The Department of Agriculture has said approximately 7.5 million trees were blown down during the bad weather. According to Paddy Bruton of Forwood Forestry, forests around the country became “an absolute disaster zone” following the stormy weather.

“No forest could withstand that,” said Mr Bruton.

“And once one tree goes, you have the domino effect. All the roots are interlinked.”