Plan to assemble 2,013 people at foot of Ben Bulben 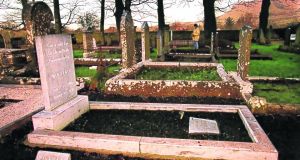 WB Yeats’s grave in Drumcliffe Churchyard, with Ben Bulben in the background. A planned Gathering 2013 event will involve participants, for €20 each, being given a coloured poncho and invited to participate in a “choreographed message of hope inspired by WB Yeats’s poetry”. Photograph: Pat Langan

The event, spearheaded by Sligo Fine Gael councillor Hubert Keaney, aims to assemble 2,013 people at the foot of the iconic mountain this summer.

Each participant, paying €20 a head, will be furnished with a coloured poncho and invited to participate in a “choreographed message of hope inspired by WB Yeats’s poetry”, Cllr Keaney said.

Beaming Yeats
The event will also involve a “light show” illuminating the poet’s grave in Drumcliffe, and will beam images of Yeats back onto the mountainside.

Ben Bulben is a candidate special area of conservation (SAC), and protection of its habitat is the responsibility of the NPWS. It has not received any submission seeking approval for the event, according to a spokeswoman.

An original plan to invite over 2,000 people to climb the mountain has been scaled back, due to concerns about access and safety. However, Cllr Keaney says he has permission from local landowners to congregate on bogland around the back of the mountain during the August bank holiday weekend.

Church bells will ring out, and the light show will be complemented by recitations by local poets, he said. The event is “totally non-profit” and has a grant from the Gathering 2013 fund. “We hope to help people rekindle their love of literature and the landscape.”

The Yeats Society,which is planning its own Gathering event as part of the annual Yeats Summer School, welcomes the project. Archdeacon Ian Linton of Drumcliffe Church said no formal request had yet been submitted to illuminate the poet’s grave.