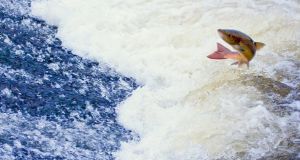 The organisation’s annual report says 22,000 environmental inspections were carried out last year, 2,500 more than in 2015. Items seized by its officers ranged from nets and rods to dinghies and spears.

The report showed there were 31 reported incidents of fish kills last year. Of the 103 prosecutions initiated last year for fisheries and environmental offences, 66 were brought to a conclusion.

Speaking at the publication of the report, the organisation’s chief executive Dr Ciarán Byrne described illegal fishing as an “environmental crime of the highest order” which could potentially do serious damage to the State’s €836 million fishing industry.

“Sometimes people think this is a victimless crime: ‘You know what, it’s only a fish, who cares’, a touch of the old ‘one for the pot’. It’s not, this is environmental crime of the highest order.”

Dr Byrne described last year as a successful one in regards to the State organisation’s operations, but noted concerns about the impact Brexit was already having on Ireland’s angling sector, estimated to be worth €750 million a year to the economy.

“The vast majority of our angling tourists come from the UK, and all of a sudden with Brexit it may become harder to get here. It’s certainly become dearer to get here, so overnight our angling product is 15 per cent dearer than it was this time last year.”

“The reduction in the value of sterling and who knows what will happen in the future, that could have an impact on the tourism sector...We have a tremendous resource, and I’m hopeful that Brexit won’t have a huge impact, but clearly it is a challenge going forward.”

Commenting on a case where fisheries officers were confronted at gunpoint while attempting to remove an illegal net in Donegal last July, Mr Kyne paid tribute to the professionalism of staff. He vowed to push the Government for a renewed recruitment drive for Inland Fisheries Ireland.

“There was a very serious incident last year in Donegal where fisheries staff were held up at gunpoint while trying to do their job, trying to remove an illegal net from a river. They were very shook at the time, and clearly it goes to show the very important and dangerous job that they sometimes have to do.”

Addressing the territorial dispute between the Ireland and the UK over fishing rights within and oversight of Lough Foyle, Mr Kyne said negotiations between the relevant authorities either side of the Border had not yet yielded solid results. He described it as “a very delicate matter”.

The encroachment of invasive species such as Asian clam and African pond weed is a continuing difficulty, and Dr Byrne said this would likely be “the big story” in a decade as Ireland’s climate becomes warmer.