Water from third of Irish wells ‘contaminated with E. coli’ 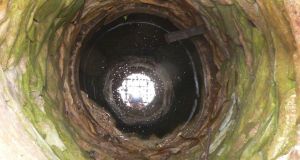 Nearly a third of all private wells in Ireland are contaminated with E. coli and contain water that is unsafe for consumption, the Environmental Protection Agency (EPA) has said.

Recent studies revealed that Ireland has the highest incidence of VTEC (Verotoxigenic E. coli), a particularly nasty form of the bacteria, in Europe.

Cases of the variant strain have increased in the State from 284 in 2011 to 704 in 2013. The bacteria is known to induce symptoms such as abdominal cramps and diarrhoea as well as potential kidney failure for children, according to Dr Una Fallon, chair of the HSE’s National Drinking Water Group.

“VTEC is a nasty illness and cases have been linked to contaminated wells. VTEC infection is most common in children and in up to eight per cent of cases patients go on to develop serious kidney complications which can, on rare occasions, prove fatal,” said Dr Fallon.

Complacency can often be an issue, with well owners unaware of what may lurk within trusted water reserves. Although it’s possible to build up a resistance to such water-borne illness, EPA programme manager David Flynn said all private well owners should test their supply.

“Lots of people assume that because their water comes from a well or a spring that it’s completely pure and safe to drink, but that is not necessarily the case. We estimate that up to 50,000 private wells in Ireland are contaminated with human or animal waste and this can cause significant threat to people’s health,” said Mr Flynn.

“Sometimes, we find that people can develop immunity themselves, but visitors to the house, particularly children and the elderly are at risk of getting very sick,” he added.

Well contamination can arise from exposure to animal waste, pesticides and general agricultural runoff caused by periods of excessive rain. Although affected water can show signs of discoloration or odour, the nature of the microbial bacteria means that it can completely unnoticed while still posing a health risk.

The news comes as the EPA launches its ‘Protect your well’ campaign, which includes a new app and website instructions on how to test a well for contamination.