Watch Storm Barney sweep in from Atlantic over Co Donegal

Around 200 homes remain without power from the 45,000 which were cut off on Tuesday

Crohy Head in western Donegal is exposed to Storm Barney as high winds sweep in off the Atlantic Ocean. Video: Iain Miller 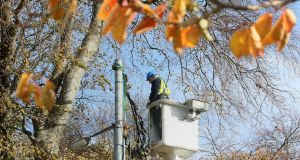 More than 200 homes and businesses remained without power on Thursday morning following Storm Barney which hit Ireland on Tuesday night.

About 45,000 homes lost power on Tuesday when heavy winds and rain lashed the country, bringing down trees and causing line faults to train services.

According to the ESB real-time powercheck map on Thursday morning, 237 homes remained without power. The electricity provider apologised to customers for the loss of power and said it was working “to repair a fault affecting your premises and will restore power as quickly as possible”.

The 70 customers in Ballybeg, Co Wicklow, who are without power can expect to have electricity again from 10am on Thursday morning, followed by power repairs in Arklow and Monfin near Enniscorthy at 1pm.

Customers in Newcastle West and Cappamore in Co Limerick are assured powercuts will be resolved by 12pm on Thursday while ESB says power will be back in Collooney, Co Sligo, by 6.30pm.

In a message on its website, ESB advises customers to report any damage to electricity infrastructure such as fallen wires or a damaged electricity by calling 1850 372 99. It warned that these live wires are extremely dangerous.

A yellow weather warning remained in place on Thursday morning with westerly winds of force 6 or 7 expected on coasts from Loop Head to Malin Head to Wicklow Head.

A yellow weather alert informs people of weather conditions that do not pose an immediate threat to the general population, but only to those directly exposed to the weather depending on where they live on the island.

Thursday will be a cool and breezy day with rain over the southern half of the country clearing for a short time this morning. However, rainfall may return to parts of the south coast later in the day. The weather will be bright with scattered heavy showers, particularly in western and northern areas. Temperatures will range from 7 to 11 degrees.

Weather Thursday night will be cool and dry at first, but rain will spread southwards by night overnight. Temperatures will fall to 2 degrees with patchy frost in parts of the midlands.

Friday will be cold and breezy with sunny spells and scattered heavy rain and hail showers. There is a risk of wintry showers in parts of Ulster and over higher ground with temperatures reaching 8 degrees during the day.

The colder weather will continue over the weekend with temperatures falling to zero overnight. However, the milder weather is expected to return next Tuesday and Wednesday with less frost expected.

Customers can check for power repair updates at www.esbpowercheck.ie or by following @ESBNetworks on Twitter. If their outage is not listed, they should call 1850 372 999.