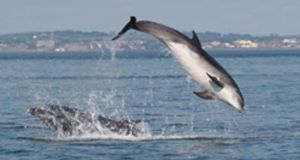 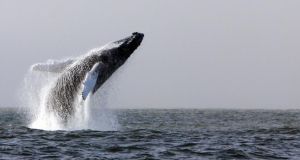 If it’s an ill wind that blows nobody good, it’s no wind at all that is nirvana for whale and dolphin watchers.

The pod of dolphins caught on underwater camera off Baltimore, west Cork this week reflects the intense feeding activity by marine mammals off the west and south coasts.

Humpback, fin and minke whales and dolphins are gorging on scad and herring, and have been sighted from Wexford around to Bloody Foreland off Donegal.

“It’s peak whale watching season this time off year, and these dolphins are nothing exceptional - but the current band of high pressure is making it much easier for us to spot them,” Padraig Whooley of the Irish Whale and Dolphin Group (IWDG) told The Irish Times.

“We had common dolphins riding on the bow of Colin’s boat for four to five hours,” Mr Whooley said, proving once again that “Ireland is the world class location for whale watching in the north Atlantic”.

Earlier this autumn, the IWDG recorded sightings of beaked whales - some of the most rarely seen cetaceans on the planet - from the deck of the Celtic Mist on the Porcupine Bight, about 120km southwest of Kerry.

Research published earlier this year on the dietary habits of fin and humpback whales suggested that they are attracted to the Irish coast by the superior taste of our scad and herring stocks, whereas these species feed on krill in other parts of “blue Europe”.

The research led by Dr Conor Ryan of the Galway-Mayo Institute of Technology and involving the IWDG and the Marine Institute, found visiting fin and humpbacks will follow the seasonal movements of sprat and herring as they congregate inshore to spawn between Slea Head, Co Kerry and Wexford’s Hook Head peninsula.