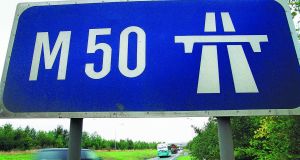 The M50, which has seen a 10 per cent rise in traffic volumes, is excluded, with the East-Link, from one-month toll holiday for heavy goods vehicles

A one-month toll holiday for heavy goods vehicles in November has been proposed by the Minister for Transport in an attempt to entice hauliers away from local roads and on to motorways.

The State will cover the estimated €3 million cost of the tolls forgone on the seven routes in what is one of the busiest months for haulage traffic in the run-up to Christmas. The M50 and the East-Link are excluded.

The move has been prompted by the relatively low traffic levels on some tolled motorways and concern at the road safety implications of goods vehicles using towns and villages to avoid toll fees.

Leo Varadkar said last night many parts of the €12 billion motorway network were being avoided by heavy goods vehicles. “The M1 outside Drogheda is a good example, where large numbers of HGVs avoid the toll but have to pass through Slane in order to do so, which is hugely inconvenient to both the truck drivers and local residents.”

He said the M3 from Dublin to Kells and the Limerick tunnel were other examples where trucks were using older roads nearby to avoid tolls.

“I want to find out if trucks will start using our motorways more often if we change the current tolling regime.”

The National Roads Authority has written to all public-private partnership toll road operators informing them of the plan, which is subject to their agreement. A spokesman for the authority said “overall traffic levels on the motorway network are well-below expectations due to the economic climate and HGV usage was part of this decline”.

The exception is the M50, which has seen a 10 per cent rise in traffic volumes.

A spokesman for one of the private toll operators was sceptical about the plan, saying it called into question the entire basis of tolling.

Eoin Gavin, president of the Irish Road Haulage Association, said a toll holiday was among suggestions made to the Minister by hauliers in correspondence earlier this year.

“They tried a toll holiday in the UK, on the M6, and it worked and you finally got an accurate picture of the level of toll avoidance. The next step is to review and revise the HGV toll rates.”

Mr Gavin said hauliers were avoiding tolled routes because the additional time and fuel spent circumventing the toll was still less than the tariff.

Mr Gavin said another issue was the annual rate of road tax for Irish-based hauliers – at €4,000 per annum, one of the highest in the world.

A working group comprising hauliers and representatives from the Departments of Transport, Justice, Environment and Finance is due to meet next month in advance of the budget to discuss possible changes to road tax for hauliers and toll rates.

Four tolled motorways in the State are loss-making; the M3, Limerick Tunnel, M6 and the N25 Waterford bypass.