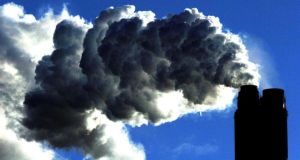 Massive cuts to greenhouse gas emissions are needed in the next few decades to avoid “dangerous” climate change, a major international report has warned.

Output of carbon dioxide and other climate-changing gases has increased in recent years, despite efforts to tackle global warming, the latest study from the UN’s Intergovernmental Panel on Climate Change (IPCC) found.

It is still possible to keep global temperature rises to no more than two degrees above pre-industrial levels by the end of the century, the level at which it is thought dangerous impacts of climate change will be felt.

But substantial reductions in greenhouse gases will be needed, through large-scale changes to energy supplies and use, as well as curbing deforestation and planting forests.

The Green Party has welcomed the publication of the report. Party leader Eamon Ryan said the benefits of acting on its proposals “in saved lives and protected natural systems are almost too valuable to measure”.

It was necessary to increase investment in clean power supplies by some 100 per cent per annum, while annual spending on fossil fuels had to fall by 20 per cent, he said. “We will also have to change our transport, agriculture and building systems, but there is no reason we cannot make the necessary changes.”

The party’s environment spokesperson, Cllr Malcolm Noonan, said: “While acting to minimise increasing temperatures will make a small impact on global economic growth, the cost of business-as-usual will be catastrophic, resulting in persistent worldwide economic decline and a collapse in social order. In fact, we must now have the courage to question the economic paradigm that has led us to this perilous state.”

The report found emissions need to be reduced by 40 per cent to 70 per cent on 2010 levels by the middle of the century and to near zero by 2100, to make it likely temperatures will not go above two degrees, the report said.

This will require a shift away from investment in fossil fuels and a three- or four-fold increase by 2050 in the share of energy from low-carbon sources such as renewables, nuclear and power plants fitted with technology to capture and store carbon underground.

By the end of the century fossil fuel power plants without carbon capture and storage will need to be virtually phased out.

Measures will be needed to make transport cleaner, improve energy efficiency in homes, offices and industries and change behaviour to reduce energy demand, the report said.

Ambitious efforts to cut emissions could also involve growing crops which take in carbon dioxide and then burning them for energy in power plants fitted with carbon capture and storage technology, to actively take emissions out of the atmosphere.

Steps need to be taken immediately, as delaying action even to 2030 increases costs and makes it harder to keep temperatures from rising to dangerous levels, the report warned.

A failure to take more action than is already planned to curb greenhouse gases leaves the world at risk of temperatures soaring by up to 4.8 degrees by 2100, the experts warned.

The report from the IPCC on mitigating climate change is the third part of a wide-ranging international review into the issue.

The second part of the research, published two weeks ago and which focused on climate impacts, warned that the effects of rising temperatures were already being felt across the world.

Without action, climate change would increasingly threaten security, health and food supplies, exacerbate poverty and damage species and habitats, the report into the impacts of global warming said.

Otto Edenhofer, one of the experts leading the latest review, said: “Climate policies in line with the two degrees Celsius goal need to aim for substantial emission reductions.

“There is a clear message from science: To avoid dangerous interference with the climate system, we need to move away from business as usual.”

He added that the review had found many pathways that led to a future which kept the world within the two degrees goal.

“All of these require substantial investments. Avoiding further delays in mitigation and making use of a broad variety of technologies can limit the associated costs,” he said.

Global growth is expected to be between 1.6 per cent and 3 per cent a year, and ambitious moves to reduce emissions would curb the increase by just 0.06 percentage points, the report suggests.

There could be negative side-effects of tackling climate change, the report says, but the economic estimates do not include the benefits of curbing rising temperatures.

There are also other advantages to cutting emissions, such as reducing air pollution which would improve human health.

Following publication of the report which involved hundreds of experts from around the world, environmental campaigners called for a shift away from fossil fuels to cleaner energy to drive down emissions.

1 Lithuanian man given until midnight on Saturday to leave Ireland
2 The view from Clondalkin: If Sinn Féin don’t get in, ‘there will be marches’
3 Coronavirus in Europe: Two dead in Italy as fears grow that attempts to contain illness are failing
4 Ryanair’s Michael O’Leary under fire for comments on Muslim men
5 Founder of disabilities network sexually abused six women
Real news has value SUBSCRIBE