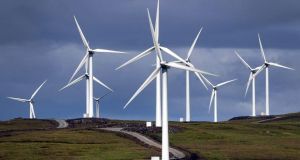 Beinn An Tuirc wind farm on the Kintyre peninsula in Scotland: communities that accept a wind farm in their midst could receive a package of benefits worth £100,000 a year. Photograph: Ben Curtis.

Local communities in England will have greater rights to object to wind farms, under new guidelines just published by the British environment department.

However, they will not be able to veto projects that comply with national planning rules.

Under the changes made by communities secretary Eric Pickles, local communities will have to be closely involved earlier in the planning debate about new farms, and must receive a fivefold increase in the benefits that locals have secured up to now.

Greater weight
The planning rules make clear that the need for “renewable energy does not automatically override environmental protections and the planning concerns of local communities”, and will give greater weight to concerns that the farms ruin the landscape.

Communities that accept a medium-sized 20mw wind farm in their midst could receive a package of benefits worth £100,000 per year, or up to £400 a year off each household’s annual bill, according to Mr Pickles’s department.

The changes were greeted with joy by campaigners, who have become increasingly vocal in their opposition to wind farms, though the government has subsequently felt the need to clarify that it was not granting a veto to locals.

Cumulative impact
The new rules will take into account the cumulative impact of turbines on the landscape, local topography and heritage assets, but housing minister Mark Prisk told the House of Commons it was “not about vetoes”.

The guidance now on offer would ensure that decision-makers correctly interpret nationally set rules, he said. “The policy has not changed. The frustration that many members have experienced is about the way in which it has been applied at a local level.”

However, Dr Hugh Ellis, the chief planner at the Town and Country Planning Association, said the anti-wind rhetoric from ministers that accompanied the announcement would cause problems, since local politicians and communities would now think they had extra blocking powers.

“Planning inspectors and planners are now in an extraordinarily difficult position. They have to say that this is not the end of onshore wind,” he told Planning Resource magazine, while other experts say much of the announcement is already followed in practice.