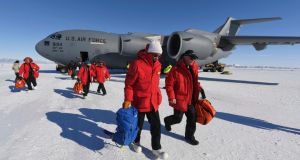 John Kerry in Antarctica: after his fact-finding mission there last week President Obama’s secretary of state stressed the deadly consequences of inaction on climate change. Photograph: Mark Ralston/pool via AP

People laughed in 2005 when a little-known energy-industry advocate with a BA in philosophy and an MSc in political science rounded on the UK’s chief scientist, David King, calling him “an alarmist with ridiculous views who knows nothing about climate change”. They’re not laughing now. The man in question, Myron Ebell, has been named by President-Elect Donald Trump to head his transition team at the US Environmental Protection Agency. The fox has been handed the keys of the ecological henhouse.

Where some people see an overwhelming expert consensus, Ebell scents a conspiracy. He clumped climate scientists and environmentalists together as what he called the forces of darkness.

Trump’s ever-pivoting positions on a range of issues could be likened to a Rorschach test, where what you see depends largely on what you choose to see. One big exception is his consistent hostility to environmental regulation. He has peddled the theory that global warming is a hoax “invented by the Chinese in order to make US manufacturing noncompetitive”.

This week, at the United Nations’ COP22 climate-change conference in Marrakesh, the outgoing US secretary of state, John Kerry, just back from a fact-finding mission to Antarctica, stressed the deadly consequences of inaction.

He said that “2016 is going to be the warmest year of all. Every month so far has broken a record. At some point even the strongest sceptic has to acknowledge that something disturbing is happening.” The world, he added, stands at a critical juncture. “If we lose this moment for action there’s no speech decades from now that will put these ice sheets back together.”

While routinely dismissing the “bullshit” science of global warming, Trump quietly bowed to reality when his own Doonbeg golf links, in Co Clare, applied for planning permission to build an enormous sea wall after 8m of frontage fell into the Atlantic during a recent storm. The application to Clare County Council cited the threat of global warming and rising sea levels.

It seems that only self-interest can motivate the president-elect to articulate a different point of view. The same cannot be said of his team. Vice-President-Elect Mike Pence is a creationist, believing that Earth is just a few thousand years old and that a billion years of geological evidence is, presumably, another branch of the vast scientific conspiracy against his belief in the literal truth of the Bible.

In 2002 Karl Rove, President George W Bush’s senior adviser, berated a New York Times reporter for being part of the “reality-based community . . . We’re an empire now, and when we act we create our own reality.” Bending reality to your ideology may work in politics. Physics is less pliable.

What if Trump turns for counsel to his new chief strategist, Steve Bannon? Bannon’s reality-warping Breitbart News Network website has personally targeted climate scientists for years, smearing them as “scum-sucking slime balls” and “eco Nazis” who are “corrupt, mendacious, bullying, fascistic, misanthropic, greedy, totalitarian and rotten to the very core”.

While Trump has often been at odds with the Republican Party, they stand shoulder to shoulder in their ambition to wipe out half a century of environmental regulations by gutting the Environmental Protection Agency and doing their best to sabotage the fragile international consensus of the Paris Agreement on tackling climate change. This ensures four years of backsliding just as the global climate system may be tipping ever-closer to irreversible catastrophe.

Even before November 8th scientists and activists were shocked by the dire news emanating almost daily from climate science. For many this is now full-blown panic. “We’re talking about anxiety disorder, but this is not a disorder,” Lise Van Susteren, a psychiatrist based in Washington, DC, says. “Civilisation is on the tracks, and you can see the train coming. That’s not a disorder: that’s responding to reality.”

John Gibbons is an environmental writer and commentator; @think_or_swim