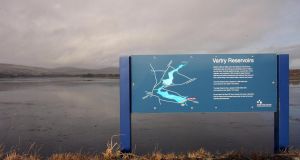 Thousands of homes across Dublin face overnight water restrictions in the coming days as Dublin City Council has begun to limit supply in order to maintain essential reserves.

The council said homes would experience varying degrees of pressure loss, depending on where they were in the supply line, but precise effects were impossible to predict.

The difficulty of ensuring adequate reserves has been exacerbated by leakage from pipes that have cracked in the recent cold weather as well as a problem at the Roundwood water treatment plant.

Nightly restrictions are in place from 10pm to 7am and 9am until at least next Tuesday. Areas affected are the city centre and immediate suburbs, from Donaghmede to Sandymount and across to Rathgar and Terenure.

Those affected are likely to notice a decrease in water pressure at night and some could lose supply altogether. The council has urged people to save water by running washing machines and dishwashers only when they are full and not to leave taps running.

In a statement last night, the council said: “Water demand is currently running higher than average due to the unseasonably cold weather which has caused an increase in leakage. Our crews are repairing any breaks to the public mains as they arise.

A build-up of harmless algae in the filtration system has reduced output by nearly half, from 70 million litres of water per day to about 40 million.

“Our demand daily is 540 million litres per day for 1.3 million to 1.5 million people,” said a spokesman.
Small reserve
“We operate at a 1 per cent reserve, so we can produce an extra 5.4 million litres per day if we need to. It’s a very small reserve, so if water is taken out of the system for any reason, we have to make sure that businesses, schools, hospitals and industry can still function.”

Outer areas supplied by the council – parts of Kildare and Wicklow, including Bray – will not be affected.

While crews will attend to leaks in pipes, they cannot access private property and the public has been asked to report any sightings of water coming from the ground.

The statement said levels would be reviewed on Tuesday to see if restrictions could be lifted then. See taptips.ie for conservation advice.