The new farming: profit trumps all?

Climate change means being smart about agriculture. But a key report, A Climate-Smart Pathway for Irish Agricultural Development, struggles to find a common vision 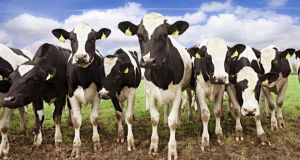 Hot air?: The lowering of Ireland’s targets for cutting greenhouse-gas emissions by 2030 was a clear victory for lobbyists in favour of radical expansion of beef and dairy farming. Photograph: E+/Getty 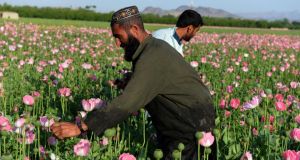 Opium crop: If Irish farmers were offered a bonanza in the cultivation of opium poppies, would we ignore the harm to public health, social wellbeing and individual lives? Photograph: Jawed Tanveer/AFP/Getty

Climate-smart agriculture is “not just a list of technologies and practices; it is also the process of engaging all stakeholders around a common vision”.

Ironically, this is one of the few statements from the recent report A Climate-Smart Pathway for Irish Agricultural Development with which all of the stakeholders might actually agree.

On almost every other issue the visions of advocates of the agricultural policies espoused by the Government and the big farming lobbies, and of those who argue that these policies will have disastrous effects on our climate and on our lives, diverge very widely.

The Institute of International and European Affairs and the Royal Dublin Society, which produced the report, made every effort to be inclusive in the forum process that produced it. They brought together organisations ranging from the Irish Farmers’ Association to BirdWatch Ireland, from Trócaire to Diageo, and from Friends of the Earth to the Irish Creamery Milk Suppliers’ Association, to consider the future of farming in the shadow of rapid climate change. And they invited national and international experts and policymakers, from the former president Mary Robinson, whose foundation promotes climate justice, to Simon Coveney, when he was minister for agriculture and food, to a series of challenging, stimulating workshops.

It is this context of hard graft, good faith and good intentions that makes the outcome disappointing. The report makes some insightful points, but its failure to engage “all stakeholders around a common vision” has been glaringly evident in the events that immediately followed its publication.

Within a week Environmental Pillar and Stop Climate Chaos, representing dozens of civil-society organisations – of which several had sat on the forum’s advisory committee – had published a report of their own. Not So Green: Debunking the Myths Around Irish Agriculture is not a direct response to the IIEA-RDS document – the second report was finished before the first was published – but the timing is intentional, and the reports’ conclusions are radically contradictory.

Then, just days after that, the EU announced that Ireland’s targets for cutting greenhouse-gas emissions by 2030 had been significantly lowered. This was a clear victory for Government and farming lobbyists in favour of radical expansion of beef and dairy farming – and a clear defeat for those who say that this expansion can only increase the greenhouse-gas emissions that are accelerating climate change.

Less than a year after the qualified optimism created by the supposedly landmark COP21 climate agreement in Paris, it seems that Dublin and Brussels are complacently back to business as usual.

And perhaps the phrase “business as usual” is the key to the failure of the IIEA-RDS report to express a vision common to all stakeholders. Although it opens by recognising that a revolutionary transformation of agriculture and land use is required globally to combat climate change, it falls far short of proposing any such revolution here at home.

Instead it goes to extraordinary pains to avoid saying anything that might challenge the imperative, in the eyes of Government and farming lobbies, of expanding the very practices that are exacerbating climate change. Reducing those practices seems to be out of the frame.

The report does set out the arguments on either side, but it then focuses very largely on measures that might – just might – ameliorate the consequences of current policy, rather than considering a change in its direction.

This policy is based on the opportunities for farmers to profit from the abolition of the EU milk levy by rapidly growing our dairy herd. Its advocates recognise that this growth will increase our greenhouse-gas emissions (or GHGs), just when we should be reducing them.  But they claim that greater “efficiency” in production, coupled (perhaps) with carbon sequestration from afforestation, will compensate for this increase.

The report acknowledges that “stakeholders and experts remain divided on whether the focus of Ireland’s response should be primarily  on increasing the GHG-efficiency of agriculture, or whether reducing overall emissions from the sector should be expected”.

It continues: “While there is good science underpinning the efficiency-based arguments, there are also clear limitations, uncertainties and valid counterarguments. In policy terms the challenge is therefore not to come down in favour of one side or another, but to seek to balance these competing perspectives.”

But it’s not at all clear that these perspectives can ever be “balanced”. It may be that one is right and the other wrong. And most of the emphasis of the report is on efficiency-based arguments, with hardly any of it on the (undoubtedly radical) option of changing the thrust of agricultural policy altogether.

An unspoken assumption underlies this skewing of the report’s perspective. If a short-term bonanza is on the table for a particular kind of farming, it seems to say, we cannot seriously question whether we should take it up, even if the cost to our society – including for farmers themselves  – is unbearably high in the medium and long term.

This skewed perspective is not the sole responsibility of the IIEA and the RDS. These organisations reflect a society whose core values are formed by an uncritical devotion to barely regulated capitalism. Profit trumps all other considerations in far too many of our decisions, here and globally.

Perhaps we need to get a grip. Let’s suppose for a moment that our farmers were offered a bonanza in the cultivation of opium poppies, without any legal penalties. Would we ignore the likely consequences for public health, social wellbeing and individual lives? That may seem like a far-fetched analogy. But if it does, that suggests we still fail to grasp the real and present dangers presented by climate change, locally and globally.

It should not be beyond our ingenuity to develop an agricultural strategy where food production is genuinely sustainable, where farmers, including small farmers, are properly rewarded, and where their land stewardship benefits all society.

The Burren Farming for Conservation project and the Uplands Council movement offer us inspirational indicators. But the gaps in the IIEA-RDS report indicate just how much work is needed to begin moving our society in this direction.

The report: ‘It’s the first word, not the last word’

Tom Arnold, director-general of the Institute of International and European Affairs and coauthor of A Climate-Smart Pathway for Irish Agricultural Development: “You have to go after the climate efficiencies that are there. That’s the underlying thesis of the report. But we also recognise that land-use issues have to be dealt with. I’ve no objection to people taking a very different approach, but it behoves those who do to spell out the consequences. If you say we should reduce our national herd we need to debate that. Our aim was to narrow the gap, to get people to talk to each other through good science and good manners. The gap narrowed on some issues, but the different world views have not grown closer. The report is the first word, not the last word; it is there to generate further discussion.”

Oisín Coghlan, director of Friends of the Earth, which was represented on the report’s advisory committee: “We engaged in the process because the IIEA has a good record in getting everyone around the table in good faith. We responded to a draft, but the final report is the work of the IIEA and RDS. It attempts to accommodate all views, and what it loses in direct language it may gain in acceptance by policymakers. It acknowledges some uncomfortable truths, such as that livestock agriculture is a driver of dangerous climate change. That departs significantly from the narrative of the Government and the IFA. But we are not at a point of common vision yet.”