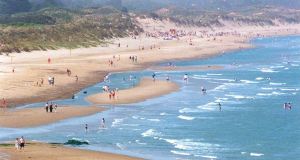 Swimming bans have been introduced at one of the east coast’s most popular beaches today and extended on six north Dublin beaches.

Tests showed poor microbiological quality and the council has taken further tests on the water to see when swimming can resume.

The council warned that swimming in the sea may cause illness. In its submission of results to the Environmental Protection Agency the council said the cause may have been contamination from a natural event.

Meanwhile a swimming ban in place at 12 beaches in Fingal has been extended at six beaches into the weekend. However the ban has been lifted at six other beaches in the north Dublin county.

The ban is due to “storm water overflow” and follows the failure of sewage pumping stations across the north of the county due to heavy rain over the bank holiday weekend.

The council has taken repeat samples today and these results will be available on Saturday.

Dublin City Council has today removed a ban for Sandymount Strand which had been introduced because of elevated levels of bacteria in the water due to emergency sewage overflow. The quality of water at the beach has improved according to results received today.