More than 5,000 bits of rubbish on every kilometre of beach 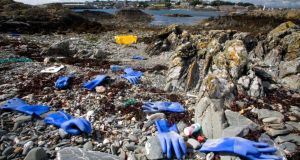 There are more than 5,000 bits of rubbish on every kilometre of beach in Northern Ireland.

A three-year environmental assessment has branded large swathes of the coastline a litter blackspot with recyclable plastic the biggest offender.

The Keep Northern Ireland Beautiful charity said the latest surveys of 14 beaches painted the worst picture yet, with an average of 1,500 bits of plastic, 425 plastic drinks bottles and 180 cotton buds on every kilometre of sand and shore.

At least 80 per cent of the litter was made of plastic and potentially could have been recycled, it said.

The worst was Ballyhornan in Co Down which had four times as much rubbish as the average, including more than 5,000 little pieces of plastic less than 2cm long, more than 400 heavy duty rubber gloves, more than 500 tin cans and 2,000 plastic bottles and caps.

Ardglass, Co Down held about 10,000 pieces of rubbish per kilometre.

Hazelbank on the northern shores of Belfast Lough was praised as were the standards on the beaches and bathing areas which fly blue flags.

But the charity warned, for example, that only 500m from designated swimming spots on the award-winning Tyrella about double the average amounts of rubbish are clearly visible.

Chris Allen, who managed the survey for Keep Northern Ireland Beautiful, said the results showed the valuable economic and environmental resources of Northern Ireland’s beaches are being trashed.

“Winter storms dumped tonnes of litter on to some beaches overnight, suggesting there is a huge reservoir of litter already in the sea, and we are just adding to it. We must come to terms with the damage we are doing to our own health and prosperity by dropping litter,” he said.

Sanitary waste, mainly what spilled out from sewage and including anything from cotton buds to remnants of nappies, made up 4 per cent of all items surveyed while metal, mostly from drinks cans, made up 6 per cent.

The figures were collected at stretches of shore and beach not known for their amenities or given blue flag status.

They include Balls Point in Derry; Runkerry, White Park Bay and Rathlin Island, Drains Bay and Hazelbank in Antrim; and Ballywalter, Portavogie, Cloughey, Ballyhornan, Ardglass, Tyrella, Kilkeel and Rostrevor around the Down coast.

They were examined as part of a European requirement to monitor the amount and impact of litter in the sea, where it kills wildlife and damages boats.

The amount of plastic on local beaches was on a par with what is being recorded across Europe.

However the Northern Ireland survey also showed the dirtiest beaches were those nearest to three fishing harbours but most of the rubbish was not directly related to the industry.

Mr Allen said some of the blame for litter on our beaches comes from winter storms throwing up vast quantities of waste carried on the high seas.

Three thousand hours were put in by volunteers cleaning local beaches this year with 15.5 tonnes of rubbish removed.