Researcher highlights risk of element being released into groundwater during fracking 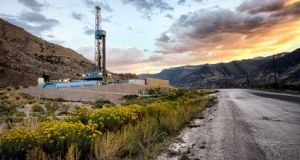 Prof John Parnell, who led the study by University of Aberdeen’s School of Geosciences, said the significance of the selenium discovery in the north of England lay in the risk of high levels of the element being released into groundwater during drilling or fracking operations (above). File photograph: Getty Images

Scientists have found high levels of the toxic element selenium in rock samples from an area in the north of England that has been targeted for shale gas extraction, known as fracking.

A team from the University of Aberdeen’s School of Geosciences studied samples from the Bowland Shale, a geological formation in the north of England rich in resources of shale gas.

The findings, published in the journal Applied Geochemistry, reveal “similarly high” levels of selenium existing in equivalent rocks in Ireland, the authors said.

Prof John Parnell, who led the study, said the significance of the discovery lay in the risk of high levels of the element being released into groundwater during drilling or fracking operations.

He said excessive levels of selenium were known to pose a risk to human health, and so “care must be taken during extraction to ensure that levels are kept to a minimum”.

Selenium also plays an essential role in the human metabolism, but the safe upper limit for adults is considered to be 400 micrograms a day.

Prof Parnell said: “A major factor to be considered during shale gas drilling is the accompanying water, which may contain chemicals that require careful treatment.

“Recently, there was widespread concern in the US when water wells near a shale drilling site were found to contain selenium at levels that exceeded the maximum amount considered safe to drink, and this was assumed to have been released from the shale during drilling.”

The samples analysed from the Bowland Shale are, he said, some of the most selenium-rich in the British Isles, and “far in excess” of the levels of selenium found in the US example.

Prof Parnell said shales in Ireland had caused selenium toxicity in livestock, further underlining the importance of the issue.

He said, however, the concentration of selenium and other trace elements in extraction waters “could be regarded as an opportunity”.

“Selenium is a rare element for which demand is likely to increase, so there is a commercial incentive here which companies will no doubt be mindful of.”

The Dún Laoghaire TD said if the Government wanted to reduce carbon emissions, it needed to ban such hydraulic fracturing.

He also pointed to the Government’s commitment in a White Paper on energy to cut emissions by up to 95 per cent by 2050.

The Prohibition of Hydraulic Fracturing Bill calls for the Government to “take bold action to contribute to preventing further climate change and reduce fossil fuel use by banning fracking”.

“Forget about reports, investigations, sitting on the fence and fudging things. It should just be banned,” Mr Boyd Barrett said when publishing the Bill.

An Taisce, as well as coalition of 28 national environmental groups and NGOs, welcomed the Bill, saying it was a climate-friendly measure.