Storm Ophelia: updated list of road closures around the country 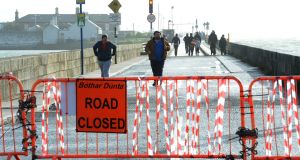 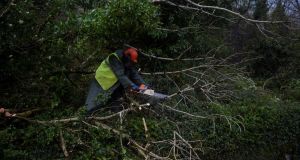 A worker clears fallen trees off a road with a chainsaw following Storm Ophelia in the Burren in Co Clare on Monday afternoon. Photograph: REUTERS/Clodagh Kilcoyne 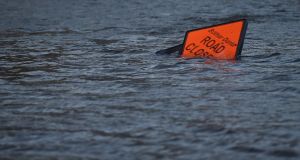 Hurricane Ophelia has caused widespread disruption on the country’s roads, with fallen trees making many impassable.

A Roadwatch has released a list of roads affected across the nation. This list is correct as of midday on Tuesday.

The Midleton/Dungourney Rd (R627) is blocked by a fallen tree.

There is a fallen tree blocking Canon’s Cross in Inishcarra on the Coachford/Carrigrohane Rd (R618).

Western Rd in Clonakilty is blocked by two fallen trees.

Two trees are down on the Bandon/Timoleague Rd (R602).

There’s a tree down near the cemetery on the local Waterloo/Newcastle Rd outside Blarney.

A fallen tree is blocking Ray’s Cross in Doneraile.

A fallen tree is blocking the Glanmire/Watergrasshill Rd (R635) between Glanmire Village and Riverstown Cross.

The Innishannon/Kinsale Rd (R605) is still closed at Shippool due to a fallen tree.

A tree is down at Millbrook, Monkstown. The road is blocked as a result.

There are reports of large overhanging trees on the Cork/Kanturk Rd (R579) at Cloghroe.

Fallen power lines have been cleared from Sunday’s Well Rd in the city near the Winters Hill jct. Nearby, Winters Hill off Blarney St is also passable again following the removal of fallen signage.

Centre Park Rd in the city remains impassable due to a number of fallen trees. Avoid.

Power lines have been cleared from outside Douglas Community College on South Douglas Rd.

Traffic on Model Farm Rd in the city is disrupted due to a fallen tree before the Carrigrohane R/A.

A tree is down on Melbourn Rd in Bishopstown.

There’s a tree down on the Bishopstown Rd in the city, near the Hawkes Rd jct.

The Marina in the city has now reopened near Pairc Ui Chaoimh.

The N71 Killarney/Kenmare Rd will remain closed until at least this evening from Killarney to Molls Gap (R568) while the council deal with a number of fallen trees blocking the route.

Gardaí in Kenmare and Bantry advise that the Kenmare/Castletown-Bearhaven Rd (R571) is passable again following the removal of fallen trees.

Mountain Rd (R678) on the Waterford side of Clonmel is closed due to a fallen tree.

The Ballymacarbry/Aglish Rd (R671) is closed at Millstreet due to fallen trees.

In Portlaw, caution is advised around the GAA Club due to a number of fallen trees.

There are trees down outside Kilmeaden at Amberhill and Blacknock.

There are fallen trees on the local Seafield Cross Rd outside Bunmahon.

Mary St in Dungarvan remains closed until further notice due to roof slates falling off a building.

There are fallen trees on the local Downey’s Cross/Barnakill Rd, just off the N25 north of Dungarvan.

There is a large branch across the Newcastle West/Foynes Rd (R521) between Ardagh and Shanagolden, however the road is passable.

There are no further reports of a fallen tree on the Limerick/Cashel Rd (R505) between Cappamore and Doon.

A fallen tree has been removed from the N69 Foynes/Tarbert Rd, outside Foynes.

Fallen trees has been removed from the N21 Limerick/Tralee Rd between Adare and Croagh.

The N74 Cashel/Tipperary Rd has reopened between Cashel and Golden following the removal of fallen power cables.

The Promenade in Salthill remains closed both ways until further notice between Grattan Rd and the golf course. Gardai report a lot of debris on the road and continue to warn people to stay away from the Salthill area.

A fallen wire has been removed from the N84 Headford Rd after Ballindooley.

Brennanstown Rd in Cabinteely is still blocked by fallen trees and power cables. Ulverton Rd remains closed due to a fallen tree.

Gardai are advising road users to avoid the Strabally Rd (R428) outside Athy due to a number of fallen electricity poles.

The Craddockstown Rd is blocked outside Naas between the nursing home and Punchestown due to a fallen tree.

There is a tree down on the Watch House Cross/Mullacash Rd. It is passable with care.

The local Straffan/Kill Rd is blocked at Whitechurch due to a fallen tree.

There’s no further reports of a fallen tree on the Maynooth/Leixlip Rd (R148) near the entrance to Carton House.

The Old N11 is blocked at Arklow Rugby Club due to fallen trees.

There is a fallen tree and electricity wires on the Wicklow/Arklow Rd (R750) just south of Blainroe Golf Club.

The Edgesworthstown/Castlepollard Rd (R395) is open again following the removal of a fallen tree.

The fallen tree has been cleared from the Longford/Mullingar Rd (R393) between Ballycloghan and Carrickboy.

Outside Abbeylara, the Toneymore Rd is closed due to a fallen tree.

There are still fallen trees on the N25 on the Waterford side of New Ross but Gardaí say the road is passable.

In Thomastown, a collapsed wall has been cleared from Maudlin St (R700).

Canal Walk in Kilkenny City is closed to the jct with Bennettsbridge Rd. Pedestrians advised to avoid this area.

Outside Dunboyne, the Summerhill Rd (R156) is blocked at Baytowncross due to a fallen tree.

There is a fallen tree on the old road between Johnstown and Kentstown and the route is impassable.

The Castlepollard/Virginia Rd (R195) is still blocked by fallen trees on either side of Oldcastle.

There is a tree down on Retreat Rd in Athlone.

A fallen tree is no longer blocking the N52 Mullingar/Kells Rd outside Cloghan.

An incident has been cleared from The Clermont Rd outside Dundalk at Greenfields.