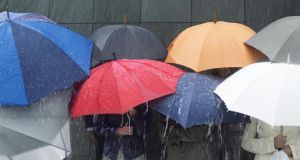 Following a dry start for many parts on Saturday morning, rain will spread across the country from the west over late morning and afternoon. File photograph: Michael Blann/Getty Images

As we head into what looks set to be a soggy bank holiday weekend, many people have been left to malign the poor May weather during a month that should provide an optimistic lead-in to the headier days of summer.

The population of Ireland may have perpetually unrealistic expectations when it comes to the country’s climate, but disgruntled would-be sunbathers appear to have a point according to a leading meteorologist.

“It looks like most of Ireland was the coldest it’s been in May for at least the last four years,” said Prof John Sweeney of NUI Maynooth.

He says there is some speculation in meteorological circles that El Niño – a five-yearly climatic phenomenon which causes extreme weather fluctuations in parts of the world – may be responsible for the disappointing conditions of late, but believes the hypothesis is unlikely in Ireland’s case.

“Most researchers think it’s not a major factor. It’s a transitional month in May between winter and summer conditions . . . In April we had a warm spell this year, but it hasn’t been repeated in May. I think people’s expectations have been just that bit too much for the time of year,” he said.

Although a comprehensive monthly report has not yet been compiled, Sweeney’s observations appear to have been corroborated by Met Éireann’s pattern readings over the last seven days.

“If you were down in Wexford you had slightly above average temperatures, Carlow and Kilkenny were average but for the rest of the country it’s slightly below average,” said forecaster Eoin Sherlock.

“What we really want is a big blob of high pressure or a nice, strong southerly airflow bringing milder air over the country but we just haven’t got that.”

Indeed, latest predictions indicate that we won’t get it this weekend either. Following a dry start for many parts on Saturday morning, rain will spread across the country from the west over late morning and afternoon.

Parts of the southeast may get a slight reprieve from the sodden conditions on Sunday, and race-goers at the Cork City Marathon could get away with dry weather depending on how fast a heavy front of rain approaches on Monday.

Just as a bank holiday weekend almost inevitably heralds a damp spell, another pattern appears to hold true for this year as higher temperatures are expected to break through to coincide with the start of State examinations next week.