A status yellow alert has been issued ahead of predicted overnight temperatures of -5 degrees and snow accumulations on higher ground in Leinster, Connacht and south Ulster. 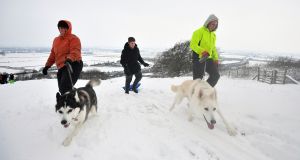 Widespread severe frost and ice is expected in many parts of the country as a yellow weather warning remains in place until Saturday.

Saturday is expected to be another very cold day with temperatures around freezing early in the morning and lying snow in parts of Ulster and north Connacht after overnight falls.

The good news for those attending the big rugby match on Saturday evening between England and Ireland in the Aviva Stadium is that it will be dry though cold with temperatures of about 5 degrees.

It will be followed by another cold and frosty night with icy stretches on untreated surfaces particularly in Border areas and the midlands.

Saturday night could see the last of the snow for the present period. Rain in the west of Ireland could fall as showers of sleet and snow, but that will be quickly followed by warmer air.

Sunday looks like the best day of the recent period with a significant rise in temperatures to between 6 and 9 degrees. It will be followed on Sunday night by rain across the country and an unsettled week ahead.

Met Éireann’s yellow weather warning remains in place until Saturday at 10am.

“I wouldn’t say milder, I would say less cold,” said Met Éireann forecaster Liz Gavin of the coming days. “The risk of snow and sleet is diminished, but not completely diminished. It will be changeable and unsettled. There is still a risk of frost and maybe some ice patches at night.”

The lowest temperature of the winter so far was recorded at Dublin Airport on January 31st with a low of minus 5.8 degrees.

Ireland missed much of the very bad weather which has affected Britain over the last week.

The UK experienced the coldest night since 2012 on Thursday night with temperatures falling to as low as minus 15.4C in the Scottish Highlands.

The Met Office in the UK is forecasting even colder temperatures on Saturday night in Scotland.

The Met Office has issued an amber weather warning of snow – its second highest grade warning – for part of the southeast with Buckinghamshire, Oxfordshire and Hampshire expected to be worst affected.

The severe snap took many commuters by surprise. More than 100 people stuck on the A30 in Cornwall took refuge in a pub along the stretch.

In excess of 2,000 schools across the west and southwest of England were closed on Friday because of the bad weather.

Ms Gavin said Ireland missed the really bad weather because the centre of the snowstorm was closer to England than to Ireland.

“It was a horrible day for everyone on Thursday, but we didn’t get as much snowfall,” she said.