Thousands of rail passengers will have their travel plans disrupted again on Monday, August 25th as staff at Iarnród Éireann engage in a second day of strike action in protest at the unilateral introduction of temporary pay cuts by management. 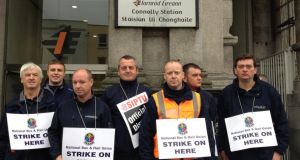 Further rail strikes will take place next month unless management at Iarnród Éireann abandons plans for pay cuts and enters into serious talks on the future of the company, the trade union Siptu has said.

Siptu leaders also signalled today that the dispute, which has brought the country’s rail network to a standstill for the last two days, could escalate further beyond the industrial action announced to date for September.

“If management [of Iarnród Éireann] continues to persist with this, this dispute will be escalated beyond that,” he said.

In a statement issued today Siptu said its 2,100 members in the State-owned rail company regretted having to undertake strike action but that “they were left with no alternative following a management decision to impose a unilateral cut to their wages”.

Mr Cullen said: “Our members do not believe that the cuts they are being asked to take will be the last they will be expected to endure. Due to the cuts in funding to the rail service the company is operating with a deficit of approximately €60 million. There is no indication that the National Transport Authority or Department of Transport have any plans on how to offset this deficit other than expecting Irish Rail staff to endure further cuts.”

“The solution to this dispute rests with management reversing its decision to cut our members’ wages and entering into serious talks with workers’ representatives on the future of Irish Rail. If this does not happen Siptu members in Irish Rail will conduct a further 48 hour work stoppage on Sunday, 7th September, and a 24 hour work stoppage on Sunday, 21st September”.

Escalation of the dispute would be bad news for frustrated commuters, many of whom waited for buses outside the station on the second day of industrial action that brought the country’s rail travel to a halt.

The strike affected about 100,000 today and another 60,000 passengers yesterday.

Security guards at the entrance to Connolly Station turned away surprised commuters and disappointed tourists laden with luggage, while members of the National Bus and Rail Union (NBRU) and Siptu picketed outside.

Sasha, a commuter who did not want her second name to be used, arrived at Heuston Station at 7:30am to catch the first train to Tullamore.

Hours later, she was waiting for a bus at Connolly Station.

“I feel bad because I was expected to start working. I’m delayed,” she said.

Another woman, who commutes to Ballymount from Howth Road, said 10 packed buses passed her without stopping this morning.

She waited for an hour before getting onto a bus. She called her employers to let them know she would be more than an hour late for work.

“I didn’t think the strike would affect me today, so I was very surprised,” she said, adding that she would avoid buses altogether if there was another rail strike.

One self-described “irate traveller” who was in Dublin for the weekend, came to Connolly Station to get a train home to Mullingar. Instead, he was outside waiting for a bus.

“There’s one phrase that you never have to use in Ireland: if it ain’t broke, don’t fix it,” he said.

Meanwhile, a group of Irish Rail employees picketed below a broken clock at the station’s side entrance.

“How can you expect managers to fix the situation at Irish Rail when they can’t even fix a broken clock? That’s everything in a nutshell,” said train driver Sean Judd.

“You’re not running trains for profit, you’re running it for people. So they can get to the shops and do whatever they have to do.”

Another Connolly Station train driver said he did not understand how the rail company’s loss of money is the fault of the workers.

“It’s bad running of the company,” he said.

He said he hoped the dispute would be resolved before industrial action planned in September:

“I don’t see how we’re losing the money. All we’re doing is driving the trains, cleaning the platforms, selling the tickets. So who’s managing the money? They need to be held accountable, not the workers.”