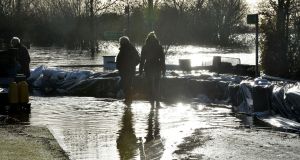 Peak water level has now been reached across the Shannon but there was a slight rise in Athlone over the last 24 hours, according to the National Co-ordination Group.

Following weeks of rising river levels punctuated by severe flooding in western and southern parts of the country the Shannon is now falling by a number of inches in some places, and although gauges along the river are demonstrating a downward trend authorities say it may take weeks for flood waters to recede.

“Overall there is a trend downward on the Shannon catchment but a very small rise at Athlone, but it appears to be peaking out there presently,” said Jim Casey of the Office of Public Works (OPW) at a briefing on Wednesday, who added that the river level has decreased by six centimetres in Limerick city over the last 24 hours.

Westmeath County Council says the Shannon has now reached its highest level in Athlone town, that no additional homes or businesses are under threat of flooding, and that it expects river levels to begin decreasing from Friday as efforts continue to pump water from affected areas.

After increasing the rate of water discharge from Lough Derg to a peak of 440 cubic centimetres per second (cubecs) – the equivalent of an Olympic-size swimming pool being released every three seconds – the ESB has reduced this to 405 cubecs, which is likely to be maintained over the coming days.

Low-level rainfall warnings may be needed over the weekend and early next week as fronts of heavy rain approach from the Atlantic, but these bouts will be interspersed with drier periods according to forecaster Joan Blackburn.

“The main message is that while we’re expecting periods of heavy rain there will be drier periods, and we’ve no immediate rainfall warnings in operation,” she said.

The Irish Red Cross says it has received 140 calls from business owners seeking to avail of the €5 million relief programme set aside by the Government, and 37 applications have been made to date.

The process has been slowed down in some instances where forms were not filled out thoroughly, but the organisation still expects grants of up to €5,000 will be paid to all eligible traders before Christmas, and further sums may be provided afterwards depending on the extent of the damage caused.

The Irish Farmers’ Association has repeatedly requested that the Government institute a similar assistance programme tailored for its members whose lands have been flooded, but the Department of Agriculture says it has not yet considered the possibility of doing so.

“The position at the moment is that our priority is to deal with issues on the ground that are of immediate relevance to farmers, such as the flooding of tanks or where farmers have to move families,” said the department’s chief inspector David Beehan.

Defence Forces personnel are still helping with flood relief efforts in Athlone, Castleconnell, and Clonlara where they are operating a boat shuttle service. Lieut Col Liam Campion said almost 1,000 Defence Forces members have been deployed in response to the flooding to date.