Donald Trump addresses an audience in Kiawah Island, South Carolina and references an investment he made in Doonbeg golf club. Video: MSNBC 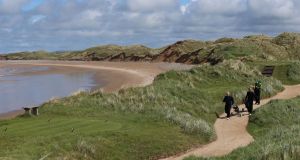 Donald Trump’s controversial €10 million rock barrier plan for his Doonbeg golf links resort has received a setback after a Government department ruled it has not been proved necessary.

The Department of Arts, Heritage and the Gaeltacht, which is charged with protecting Ireland’s EU designated Special Areas of Conservation (SAC) sites, said the case has not been made by applicants, TIGL Enterprises Ireland Ltd, that the 2.8km, 200,000-tonne rock barrier is warranted to protect the course.

Consultants acting for Mr Trump have warned that if the US billionaire does not secure planning for the rock “berm” to protect his Doonbeg golf resort, the resort risks potential closure.

In its submission to Clare County Council, the department said it cannot be ruled out that the proposal will result in adverse effects on the integrity of at least one EU protected site at Doonbeg.

The application area of the Trump plan is located within and adjacent to the Carrowmore Dunes SAC, and the site is designated due to three different dune types and the protected 2mm snail, the Vertigo angustior.

The application has attracted over 110 submissions and enjoys overwhelming support in the local Doonbeg community. However, An Taisce, Friends of the Irish Environment (FIE), the Save Doughmore Beach Protection Group, the Irish Surfing Association, the Lahinch-based West Coast Surf Club and 30 other individuals have objected to the plan.

In its 10-page submission, the department said “the key concern in this case is the likely effects of the proposed development on the dunes and their area and structure and function in the long term”.

It said the dune habitats at Doonbeg “occur in a complex mosaic, and maintaining the natural dynamism of the site is a vital part of achieving favourable conservation status for the range of dune habitats present”.

The submission stated that “the construction of physical barriers can interfere with the sediment supply to entire dune systems by cutting the dunes off from the beach.

“This can result in fossilisation or over-stabilisation of the dunes and in the loss or reduction in area of embryonic or shifting dunes.”

It said that with the Trump plan, “not only is there potential for the structure to impede or alter sediment movement, its construction will remove a large volume of local beach material from circulation”.

It added: “The case has not been made to prove that the rates, patterns and causes of erosion at the site warrant the type and scale of the solution proposed.”

The department said the Trump firm’s contention that a “do nothing” scenario would have a profound negative and permanent effect upon the conservation status of the SAC is contrary to the conservation objectives for the SAC.

The department also questioned the validity of the Trump company’s claims on future erosion at the site.

A decision is due on the application next month but due to the scale of the proposal, a request for further information on the plan is likely.