Seagull numbers have declined considerably over past two decades 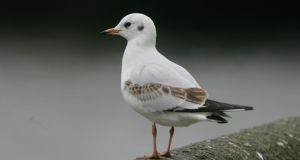 Enthusiasts cautioned against sensationalist media coverage about seagulls, including calls for protected birds to be culled. Photograph: Bryan O’Brien

Seagulls very rarely harm people, they don’t have claws and their numbers have fallen dramatically in the past 20 years, birdwatchers have pointed out.

Enthusiasts cautioned against sensationalist media coverage, including calls for protected birds to be culled, after a week where gulls have been accused of killing sheep, stealing phones and attacking motorcyclists.

“It’s no coincidence that this news story flares up at this time of year and does so every year,” said Birdwatch Ireland development officer Niall Hatch. Most of the year gulls are quite docile but they become protective in mid to late July when their chicks are about to leave the nest. “They tend to get a little more vocal and tend to swoop a bit more. People might perceive it as a threat”

But he said it’s extraordinarily rare for them to actually harm or hit anybody. “In all the media hysteria over the few days there’s actually been remarkably few reports of anyone being hurt by these gulls.”

He added that gull populations aren’t increasing, in fact the opposite is true with numbers of the smaller herring gull declining substantially in the past two decades.

“Just over 20 years ago there were 60,000 pairs of these nesting around Ireland and that population plummeted to around 6,000,” said Mr Hatch.“They’re now on the red list in Ireland as being endangered.”

Rónán McLaughlin, a birdwatcher and photographer based in Co Cork, said overfishing in Irish waters conrtibuted to the herring gull leaving coastal nesting sites in favour of landfills. When the landfills closed the birds had to find another food source, so they headed for urban areas. “They’re very adaptable and very intgelligent, they’re going to go where the food is.”

The scavenging birds eat discarded food in towns and in some cases keep rodent populations down by eating rats. “It’s not the loss of a habitat, it’s just that the birds have adapted in a different way to feeding and decided: ‘we can go to the beach, we can go to seaside resorts because it’s easy pickings’,” said Mr McLaughlin.

He added that recent headlines about giant gulls using their claws to kill sheep in Kerry amount to media scaremongering. “I mean, a seagull doesn’t have claws. It’s got webbed feet for starters.”

He said the last thing birdwatchers wanted was for someone to “go down to Dingle with a loaf of bread and just lace it with rat poison or something like that”.

An article by Calvin Jones on irelandswildlife.com this week noted an online poll where more than half the respondents supported culling gulls. “I can’t help feeling that’s partly because people are reading and believing all of these horror stories in the media, without any balancing arguments, or a full understanding of the facts,” he wrote.

Niall Hatch from Birdwatch Ireland agrees. He said the coverage has been “extremely frustrating”. But it also highlights a disconnect between Irish people and nature. “There does seem to be a lack of awareness of nature and of wild animals and of how wild animals behave. That’s something we find a lot in Ireland and it’s not necessarily the same in other European countries,” he said.

Either way, the coverage is likely to die down shortly enough. Gulls don’t need to look after their young for too long, said Mr Hatch. “This aggression or what perceived aggression there is will cease in the next week or two. There are actually more gulls in our cities during the winter but we don’t hear any complaints like that, it’s just a late-July phenomenon.”