Roll-out of water meters starts at house in Maynooth 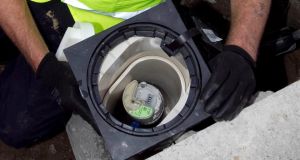 The national installation of water meters started today with the first device put in place at a house in Maynooth, Co Kildare.

Speaking in Maynooth the head of Irish Water John Tierney said the roll-out of domestic water meters was four-times as ambitious as any comparable programme known to the firm.

At 27,000 meters per month, the three-year time frame to introduce water charges for all households will cost €539 million.

Mr Tierney said most other countries examined by Irish Water already had some levels of domestic metering.

Describing the installation of the meter as an “historic” moment Mr Tierney said it was often forgotten that rural areas had water charges between 1962 and 1997 and they had been introduced in urban areas including Dublin in the 1990s.

Installing water meters is one of the conditions in the bailout agreed between Ireland and the trokia.

Irish Water argues the current funding model for the public water system is no longer sustainable.

It says it costs €1.2 billion to provide fresh water each year, about €1 billion of which comes from the exchequer.

“I fully support anybody who seeks to block the installation of meters, and hope that there is a resistance to attempts to charge people for this service later on,” she said.

The TD for Dublin North also added that money “wasted” on the installation process would be better spent on repairing leaks and implementing water conservation measures.

The councillor for Dublin 15 said just 16 per cent of all water used nationally was for domestic purposes while 36 per cent was lost due to leakage.

A spokesman for the Department of Environment disagreed with Ms Coppinger’s figures and said domestic consumption was estimated at 39 per cent of water use while the amount lost to leakage was 41 per cent, based on the Local Authority Service Indicators Report from 2011.

Ms Coppinger said many households would angered by the installations that in many areas “people simply haven’t got one more cent to give”.

Meters will be installed outside domestic residences, generally at stopcock points on the public footpaths.

Households will be notified 14 days before installation, and again two days before. They do not need to be at home when the meter is installed.

A contractor from one of these consortia – who will also hold Irish Water identification - will call to the door and ask occupants not to use the water for the duration of installation, which can take up to two hours.

Within three days of installation the contractor will call back to check the water supply is working correctly.

According to Irish Water contractors must reinstate the ground outside properties within a maximum of 10 working days, otherwise they will not be paid.

Charges will apply in the last quarter of 2014 and bills will be issued in 2015. Households without meters will pay an assessed charge.

It is estimated that some 1,600 jobs will be created through contractors installing the meters.

One in four of these positions are also expected to be allocated for small businesses, the unemployed, early school leavers and graduates.