Restrictions due to ‘wrong kind of water’ 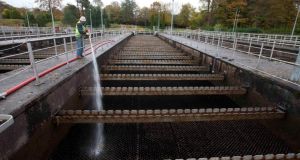 A worker hoses out a filtration tank at the Ballymore Eustace water treatment plant in Co Kildare. Floc, coming into the tanks from an unknown source, is causing the city council to ration water in Dublin. Photograph: Eamonn Farrell/Photocall Ireland

In the early 1990s British Rail drew much derision upon itself for blaming the “wrong kind of snow” when caught out by a cold snap which ground services to a halt.

The phrase became a byword for bizarre excuses and while it may not have brought about the privatisation of the rail network, which happened not long after, it was certainly grist to the mill for those who wanted to paint the public service as incompetent.

Now it appears Dublin city council has been hit by the wrong type of water.

Announcing what he admitted were “very severe” water restrictions city engineer Michael Phillips said the “character” of the water at the Poulaphouca reservoir, the main source of water for 1.5 million people, had changed in recent weeks.

This change in its nature made the water difficult to treat with by the usual processing methods, and meant an adequate supply of treated drinking water couldn’t be produced.

The council tried different methods to solve the problem and avoid water restrictions, but ultimately these weren’t successful and restrictions had to be imposed.

Mystery
Why this has happened, the council engineers aren’t sure. Water changes from season to season, but this is not a type of water the council is familiar with. Whether this current problematic water has been caused by the weather, or the climate, no one knows.

There seems to no good time of year for water. Understandably in the summer we can experience droughts, although most summers that’s not a great worry. In the winter burst pipes can cause a loss of supply – again fair enough, we’re not dealing with infrastructure that was put in the ground yesterday, or even in living memory in some cases.

But during a grand mild, soft, soggy autumn surely people can expect to turn on the tap with confidence?

The problem when water isn’t flowing from the tap is rarely one of a lack of water. The Poulaphouca reservoir stores enough water to last for between 120 and 180 days depending on rainfall, which rates well by international standards. It is in the capacity to treat that water that Dublin’s problems lie.

The reservoir feeds the Ballymore Eustace water treatment works. About €100 million has just been spent to bring its capacity to produce water from 252 million litres a day to 310 million litres a day. But this increase in capacity still leaves supply on a knife edge and is not sufficient to cope with unforeseen circumstances.

The Government’s solution is to pump water from the Shannon at a rate of about 350 million litres a day, but the €500 million project is still quite far into the future, the city council’s executive manager Adrian Conway said.

“Realistically it will be close to 10 years before it’s producing water.”

The upgraded Ballymore Eustace plant is still in its final commissioning phase, so Mr Conway did consider that it might be an engineering “teething problem” that caused the hitch. However he doesn’t believe this is the case.

“The plant was designed to deal with water within a range of types, but this is outside that range and isn’t the type of water we’ve seen in the last 60 years.”

The council expects the water will return to normal but, Mr Conway said, it is not sitting back waiting for the right type of water to return. Engineers are working to find ways of processing this new water more efficiently, but have to take care that any changes don’t affect the processing of the usual type of water when it returns.

Next January, responsibility for the public water system transfers to Irish Water. While it is not the same as the privatisation of British Rail, with the water remaining a publicly owned utility, it is a transfer of control from the State’s largest provider of water services, the council, to a whole new body.

If Irish Water were in charge today, would we still be facing into at least five days of water cuts? Probably. The council will still be handling the day to day production of water under service agreements with Irish Water for the next 12 years, and anyway, it doesn’t seem that human error is to blame here – just a historic lack of investment. And the wrong kind of water.