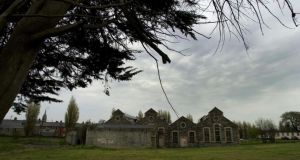 Students are due to move to the new consolidated campus on the site of the former St Brendan’s hospital in the northwest inner city in September. Photograph: Frank Miller

Residents around Grangegorman, Dublin, have accused a State development agency of breaching planning permission for the new DIT campus, just a month ahead of the arrival of its first students.

Some 1,000 of the DIT’s 20,000 students are due to move to the new consolidated campus on the site of the former St Brendan’s hospital in the northwest inner city in September.

The planning scheme for the development, approved by An Bord Pleanála two years ago, required entrances to be opened at the eastern and western boundaries of the site to reduce “excessive pressure” on the local road network.

“The opening up of these accesses prior to the occupation of the facilities by the DIT students is a prerequisite of the planning scheme,” the board stated.

However, the Grangegorman Development Agency says these gates will not now be open ahead of the arrival of the students, who will enter the campus from the North Circular Road or Grangegorman Lower.

The Grangegorman Residents Alliance, an umbrella group of local residents associations, said the failure to open the two entrances would result in traffic gridlock.

“The area already has a serious traffic problem with long tailbacks on the North Circular Road and Rathdown Road leading on to Grangegorman Lower, and now they are going to try to bring 1,000 more people through that bottleneck,” alliance chairman Pirooz Daneshmandi said.

“This is an issue of complying with planning permission. Is nobody in this country going to abide by the law? We are just asking people to do their job and enforce the decision made by An Bord Pleanála”.

If the students did arrive ahead of the opening of the entrances, the alliance would consider legal action or a possible blockade of the campus, Mr Daneshmandi said.

The council is investigating the complaint, according to executive manager of the planning department Jim Keogan.

The east and west entrances were outside the area governed by the planning scheme and land ownership issues had arisen in relation to both gates, he said.

The eastern entrance is the Broadstone Gate which was to provide the main vehicular, pedestrian and cyclist access entrance for the campus as well as a stop for the new Luas Cross City line.

The plans involved the demolition of a small number of buildings, including the Maxol garage on Constitution Hill. However when Maxol last year withdrew its consent for the demolition, the council had to redraw the plans, working the new entrance plaza around the garage.

The western entrance on to Prussia Street has also presented a problem in that some of the lands needed are in private ownership and an agreement has not been reached on their sale.

Mr Keogan said there was currently no issue of non-compliance with the board’s decision as there were no students on site. “We are looking into the complaint and we will evaluate the situation on September 1st. We will not ignore [the planning scheme] but this is a national project and there has to be a degree of reasonableness applied.”

A spokesman for the development agency said it was in compliance with all permissions granted to it by the council.