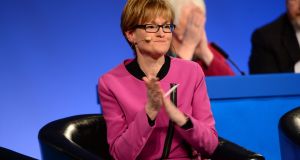 Mairead McGuinness MEP: “I’m very troubled about the idea of a Great Repeal Bill if it allows for the elimination of some core elements of environmental law by the United Kingdom.” Photograph: Dara Mac Dónaill

The UK’s touted Great Repeal Bill after Brexit could spark a “bonfire of environmental regulations” leading to a disparity in protections on either side of the Irish Border, a conference has heard.

The Bill has been talked about by UK government ministers as a potential mechanism to repeal EU-influenced legislation from the domestic statute book immediately after Brexit.

Mairead McGuinness MEP told the conference, Brexit: Implications for the Environment on the Island of Ireland that the potential resultant diminution of standards in Northern Ireland was “an appalling vista”.

“I’m very troubled about the idea of a Great Repeal Bill if it allows for the elimination of some core elements of environmental law by the United Kingdom in a post-Brexit era,” she told delegates at the conference in Dundalk on Friday.

She added, “We are committed to making sure we don’t dilute, diminish or dump any of our standards, and that we discourage in the strongest way possible the United Kingdom from even thinking about going down that road.

“Pulling away from hard-fought rules and regulations on environment, food safety and public health would be an appalling vista in 2017 and we cannot allow that to happen in a post-Brexit era,” added Ms McGuinness, also referencing the start of formal Brexit negotiations next Monday.

Sinn Féin MEP Lynn Boylan said the UK may choose to “disentangle” itself from some 800 pieces of EU environment legislation that have been transposed into domestic law over recent decades, and that offer vital protections for vulnerable habitats which straddle both sides of the Border.

He said the UK would no longer be answerable to the European Court of Justice when it leaves the EU, and no other body has anywhere near the same authority to hand out sanctions for environmental infringements.

He pointed out that Northern Ireland has in the past been regarded as the “dirty corner” of the UK in terms of environmental protection.

Emily Hunter of the Royal Society for the Protection of Birds (RSPB) said it may well become the case that people and authorities in the Republic will have no avenue of recourse should they be affected by pollution emanating from a Northern Ireland which lies outside the court’s jurisdiction.

Speakers from the conference floor expressed concerns about a sweeping repeal Bill in the UK opening the door to fracking and the cultivation of genetically modified crops in Northern Ireland, which could have consequences on the other side of the Border.

While sceptical about the prospects of a total purge of existing EU laws, David Baldock from the Institute for European Environmental Policy said there would undoubtedly be a temptation for the UK to introduce lower environmental standards to gain an economic advantage.

This could in turn lead to a “chill factor” for EU policy should European states wish to follow suit and redress an imbalance.

Some contributors, however, identified Brexit as an opportunity to strengthen protections.

Karin Dubsky of Coastwatch Europe said it might lead to a “focusing of minds” on topics such as biodiversity and marine conservation, while John Martin from the RSPB termed it a “once in a lifetime opportunity” to strengthen policy on sustainable agriculture.

Dr Jack pointed out the UK was responsible for developing some environmental schemes later adopted into EU law. The meeting was jointly organised by the European Parliament in Ireland along with advocacy groups Environmental Pillar and Northern Ireland Environment Link.