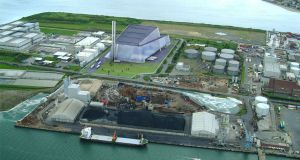 A computer-generated image of the planned Poolbeg incinerator in Dublin.

Fresh concerns have been raised over the development of Dublin’s Poolbeg incinerator by US waste firm Covanta, following the failure of emissions tests by a Canadian plant built by the company.

Covanta last May had to close one of the two boilers or “stacks” at its newly built Durham York incinerator near Toronto after emissions exceeded the limits set by the Canadian ministry of environment for dioxins and furans by 13 times.

Dioxins and furans are toxic byproducts that can result from burning waste.

Joe McCarthy, a physicist and member of the environment committee, said the problems at the Canadian plant showed the validity of concerns over emissions from incinerators and the quality of testing.

“What frightens me about this, is it is first time we’ve been able to get real information on a real problem that is inherent in the incinerator industry.

“I am concerned the testing regime at Poolbeg will not be sufficiently stringent to protect human health.”

Mr McCarthy, a Sandymount resident who had appealed to An Bord Pleanála not to approve the plant, said the planned testing regime for the Poolbeg plant should immediately be made public.

Anti-Austerity Alliance councillor and member of the environment committee Michael O’Brien said he hoped public awareness of Covanta’s performance in Canada would stop the development of the Poolbeg plant.

“I put it to the Dublin City Council officials responsible for oversight of the Poolbeg project to broach this situation with Covanta and to do what is necessary to satisfy the Dublin public that the flaws built into the Durham York Incinerator are not being replicated in Poolbeg.”

The project had been opposed by almost all councillors he said.

A spokesman for Covanta said while one unit at the Canadian plant did exceed the “very stringent” emission limit for dioxins and furans this did “not represent a risk to human health or the environment”.

He said there were no implications for the development of the Poolbeg plant.

The city council did not respond to queries on the matter yesterday.