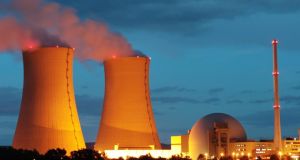 Nuclear energy would be a clean, safe, and cost effective means of generating electricity, representatives from Better Environment with Nuclear Energy (BENE) told members of the Transport and Communications Committee this afternoon.

BENE’s Denis Duff said Ireland needed to start looking for alternatives to Moneypoint power station, which is capable of generating about 25 per cent of the country’s consumer electricity demand . He argued that wind and wave energy was unsuitable to cater for baseload requirements because it is intermittent and “likely to be very expensive”. He added that gas energy, while suitable, was “not as clean as many people think”, releasing about 40 to 60 per cent of the emissions as coal.

The group is calling on the Government to repeal section 18.6 of the Electricity Regulation Act which prohibits the use of nuclear fission for the generation of electricity.

It hopes to see the introduction of “small modular reactors” - the type of power plants used in nuclear submarines - which it says have “an extremely good record of safety and reliability”.

Mr Duff said these types of plant are cheap because they are built and tested in factories in the USA and China and then assembled on site. He said their size, delivering about 200 megawatts of power, would suit Ireland. They cost about €1.4 billion and can be constructed in 18 months to three years. In a best case scenario, Mr Duff said, they could deliver a unit of electricity for about 5 cents.

The members of the committee welcomed the discussion on nuclear energy but questioned whether there was a public appetite for it. Pointing to concerns over disasters like Fukushima and Chernobyl, Michael Moynihan (FF) said, “I just don’t think that the Irish people would be in a position to consider it”.

Ann Phelan (Lab) also said the public would have difficulty buying the proposal, especially when there is such vociferous local opposition to things like electricity pylons. She also asked about the issue of nuclear waste.

BENE’s Frank Turner answered that “the waste which arises is very small in volume and mass and it would be exported to the supplier of the fuel we would not have to deal with it in this country”.