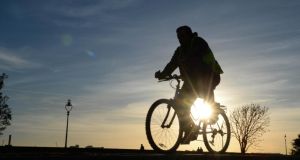 Dublin City Council intends to install CCTV along the route to deter anti-social behaviour and to fit lighting so the path can be used at night. Photograph: The Irish Times

Plans to build a €10 million-plus cycle path along the Royal Canal in Dublin have been unveiled by the city council.

The path will complete the capital’s section of the proposed national cycle route from Dublin to Galway, which will be Ireland’s contribution to the EuroVelo Route 2 extending across Europe to Russia.

The 7km route from Dublin’s north docklands area to Ashtown at the border with Fingal has been divided into three phases. But they could be undertaken simultaneously, depending on the availability of funding, according to the council.

Work on the route, which the council estimates will cost between €10 million and €12 million, is expected to start early next year.

In 2012 the then minister for transport Leo Varadkar announced plans for the construction of a 277km coast-to-coast cycling “greenway” from Galway to Dublin, due to be completed in 2020. Some of the route has already been built. The longest open stretch is a 25km section in Westmeath, from Grange South in Mullingar to the Meath border, and a further 40km from Mullingar to Athlone is under way.

In Dublin city a section of just 350m from Guild Street to Sheriff Street where the canal meets the Liffey, has been completed, and in Fingal a 2km section from Ashtown to the 12th lock in Castleknock opened last June.

The new 7km path will bridge the gap between these two sections. The two-way path will start on the left bank of the canal at Sheriff Street lifting bridge and will stay on this side until just after Binns Bridge in Drumcondra, at the junction of Whitworth Road and Dorset Street, where a new bridge will be built to take cyclists to the other side of the canal. The route will stay on the right bank until Ashtown, where it switches back to the left bank at the existing path.

Unlike earlier off-road cyclepaths in the city, the new route will not use “kissing gates” which force cyclists to dismount and are used to stop cars and motorbikes from accessing paths. Instead the council is proposing to use bollards where necessary which will allow the path to “function better as a commuter cycle route as well as a recreational cycle route”, it said.

It also intends to install CCTV along the route to deter anti-social behaviour and to fit lighting so the path can be used at night.

The proposed EuroVelo Route 2 is an east-west route starting in Galway and running across Britain, Germany, Poland and Belarus and on to the Russian capital.

The British, Dutch, German, and part of the Polish sections have been completed.