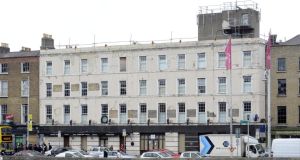 The Ormond hotel on Ormond Quay, Dublin, closed since 2005. The development company said the buildings were in poor condition and the prominent quayside site would be substantially improved by a new development, but this was being blocked by “literary fiction” and romanticism. Photograph: Dave Meehan

The demolition of a Dublin hotel associated with James Joyce’s Ulysses and the construction of a €20 million hotel on its site has been refused by An Bord Pleanála. The proposed replacement of the Ormond Hotel on the north Liffey quays, with a 170-bedroom six-storey hotel, along with a new pub, was rejected as “monolithic” and “unsympathetic” and likely to “seriously injure” the character of a conservation area.

Monteco Holdings had applied for the development at the site of the old Ormond Hotel, which has been closed since 2005, and two adjoining properties last year. The hotel, which was rebuilt about 1900, replacing Georgian houses, was the setting for the Sirens episode of Ulysses and featured in a film based on the book.

In its plans, Monteco argued that the original fabric of the hotel no longer existed and that the literary associations would be best preserved through the retention of the name of the hotel, the erection of a tourism plaque and inclusion of a “Sirens-themed bar”.

Permission for the hotel was last February refused by Dublin City Council, but the decision was appealed to An Bord Pleanála by Monteco.

The company said the buildings were unused and in poor condition and the prominent quayside site would be substantially improved by a new development, but this was being blocked by “literary fiction” and romanticism.

“The facts in relation to the building are being ignored in favour of literary fiction as no original building remains. It is argued that romantic views of history, the building and a reflection on a 1967 movie, which does not have any standing, are preventing the redevelopment of this site.”

The development represented a “€20 million-plus investment” that would provide in the region of 250 construction jobs and 80 full-time positions at the hotel, the company said.

The planing board in its ruling made no reference to the Joyce connection, but based its decision to refuse permission on the effect the new development would have on the character of the area, surrounding residents and an adjacent protected structure.

The development would “seriously injure the surviving grain, rhythm and character of Ormond Quay Upper that forms part of the Liffey Quays conservation area” because of its “monolithic design and unsympathetic proportions”, the board said.

The hotel’s orientation, height and bulk and its proximity to adjacent residential buildings would make the development “visually obtrusive” when viewed from existing houses and would result in loss of daylight, it said.

The James Joyce Centre and An Taisce had opposed the development.