Contract term has been extended to 45 years, potentially doubling its value 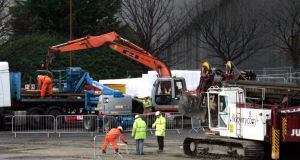 A file image of workers preparing the Poolbeg incinerator site in 2010. Photograph: The Irish Times

The contract between Dublin City Council Covanta to develop the Poolbeg incinerator has been substantially renegotiated.

A controversial “put or pay” clause, under which the Dublin local authorities would face penalties if they failed to supply a minimum of 320,000 tonnes of waste per annum for the facility, has been removed.

It has been replaced by an unspecified revenue guarantee for the first 15 years of the contract, according to a tender document published on the Tenders Electronic Daily website.

The contract term has also been extended to 45 years, potentially doubling its value, in return for US waste management firm Covanta dropping the clause.

A final deadline of August 31st has been set for Covanta to raise funding for the project.

The notice says the changes are a proportionate response to these unforeseen circumstances.

It is understood global investment group Macquarie has been appointed to raise €350 million in debt or mezzanine funding for construction of the 600,000- tonne incinerator, with Covanta to contribute €100 million to €150 million in equity for the project.

Dublin authorities now expect to be able to sell their “preferential access rights” to the private sector.

This could allow them to recoup an estimated €80 million in public money invested in the project so far, including the cost of land acquisition.

It is not known whether the latest Poolbeg timeline will be affected by the formal complaint lodged by Sandymount residents Joe McCarthy and Valerie Jennings to the European Commission in March over substantial changes to the contract terms since the procurement process began.

They claim EU rules on public procurement have been breached by Dublin City Council, in particular because the capacity was increased by 50 per cent – from 400,000 to 600,000 tonnes per annum – apparently to satisfy Covanta’s commercial requirements.

Mr McCarthy and Ms Jennings noted the original tender was awarded in 2005 to Elsam, a Danish company.

Subsequently, Elsam was taken over by Dong Energy, which then reduced its commitment to financing the project from 100 per cent to 25 per cent of the cost.

“Dublin City Council then sought a new partner and, in 2007, transferred the contract to a new supplier without going to tender” – thereby breaching EU rules, they say.