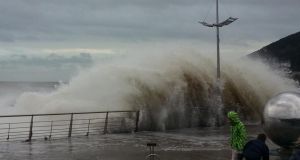 Waves break on the seafront in Newcastl, Co Down.

However, there was no widespread serious flooding as was feared, especially in low-lying parts of central and east Belfast.

Stormont ministers had earlier prepared what they called a “multi-agency response” to the flooding threat and a co-ordinated effort involving the PSNI and a range of public bodies was on standby to prevent flood damage and inform the public.

Public services including the police, Coastguard and Department of Environment workers, were on standby as the tides peaked at around lunchtime on counties facing the Irish Sea.

The River Bann at Coleraine in Co Derry burst its banks and flooded areas of the town centre for a time while the Foyle Bridge in Derry city was also closed.

In Co Antrim the coast road which runs between Larne and Ballycastlewas closed in places and the tidal surge threatened parts of Cushendall, Carnlough and Carrickfergus.

There were also local road closures in parts of Co Down with Holywood, Ardglass, Killough, Minerstown, Newcastle and Newry hit by spot flooding at high tide.

In Belfast the Duncrue area off the M2 was closed to motorway traffic. Walls of sandbags were prepared in Sydenham adjacent to the City airport in east Belfast and the underground car park at the Victoria Square shopping mall in the city centre was closed as a precaution.

Huge waves attracted sizeable crowds to both Newcastle, Co Down and to Carnlough and Cushendall in Co Antrim with local representatives expressing fears for public safety as waves, some of them more than 10 metres high crashed ashore.

As the flooding threat receded Stormont ministers said: “Ministers have agreed that their departments and agencies will continue to co-operate fully in the multi-agency response but it is important that people do not take any risks with their own safety, continue to listen for latest updates and co-operate fully with the responders on the ground.

“We are also very grateful for ongoing efforts of those from a variety of organisations who have been working through yesterday and last night, and who continue to work, to mitigate against potential risk.”

Ferry sailings were badly affected. The Strangford-Portaferry service in Co Down and the Rathlin Island service in Antrim were cancelled.

P&O sailings between Larne, Co Antrim and Cairnryan in Scotland were cancelled while Stena sailings from Belfast to Liverpool and to Cairnryan were also badly affected with cancellations and delays.

Emergency measures will remain in place for the next high tide after midnight.