New rail projects for Dublin to open by 2017 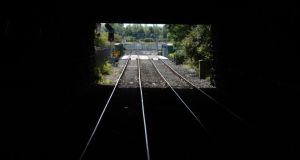 Irish people and visitors to Dublin will be able to take trains through the Phoenix Park tunnel from early 2016, travel on the new Luas cross-city line from October 2017, and possibly cycle on improved Liffeyside paths soon after.

The timeline emerged as the National Transport Authority briefed politicians on the impact of the new Luas line on the city’s commercial life and the future of its public transport.

Authority chief executive Gerry Murphy told the Oireachtas Committee on Transport and Communications that “the most important factor” in the long-term planning of transport for Dublin would be the availability of State funding beyond 2020 and the feasibility of public-private partnerships.

He said just €16 million would be needed for trains from Co Kildare, which terminate at Heuston station, to run through the Phoenix Park tunnel to Drumcondra, Connolly, Pearse and Grand Canal Dock.

Mr Murphy said the tunnel offered the possibility of electrified services between Hazelhatch and Balbriggan in an expanded Dart network, which would also include services between Greystones and Maynooth.

Mr Murphy said the major Luas construction contract, for the route from St Stephen’s Green via Grangegorman to Cabra, was due to be awarded in December.

He said plans to reduce general traffic on the city quays to one lane while upgrading cycle facilities would not go ahead until the Luas was in place.

Post-2020, he said, funding was the key issue but a number of projects were being reassessed to bring the costs up to date. These included a Dart underground and a possible heavy rail link from Howth Junction to the airport, as well as Metro North.

In Cork city, investment over the coming years would focus on the city centre and some key bus and cycling corridors. In Galway, walking and cycling improvements were planned along with further development of bus prioritisation, Mr Murphy added.

Limerick city had been designated a Smarter Travel Demonstration Area and was receiving substantial funding for sustainable travel projects. In Waterford, there would be improvements to key bus corridors to the city centre, WIT and its surrounding employment area, and the hospital, he said.