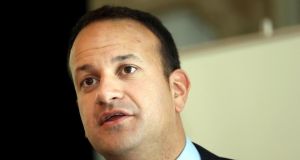 The first road project to be part-funded by the National Asset Management Agency (Nama) was opened today by Minister for Transport Leo Varadkar.

Work started in September 2011 on the project, which received funding of €6 million from the Department of Transport. The remainder was sourced by Fingal County Council and Nama.

The route starts at Church Road close to Tyrrelstown and joins the N2 at the Cherryhound interchange. Six roundabouts have been constructed along the route to link with existing local roads and provide access points to future development lands.