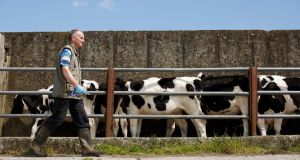 Global methane emissions arising from agriculture are considerably larger than previously estimated, a US study on carbon emissions generated by livestock has found.

The latest estimates are likely to have serious implications for Ireland given 33 per cent of the State’s carbon emissions come from farming sources.

Methane (CH4) is particularly problematic as a greenhouse gas because it contributes to global warming to a much greater extent than carbon dioxide.

Researchers at the Joint Global Change Research Institute in Maryland found global livestock CH4 emissions for 2011 were 11 per cent higher than the estimates based on guidelines provided by the UN Intergovernmental Panel on Climate Change in 2006 – the mechanism used to estimate global emissions.

“In many regions of the world, livestock numbers are changing, and breeding has resulted in larger animals with higher intakes of food. This, along with changes in livestock management, can lead to higher methane emissions,” said author Dr Julie Wolf of the US department of agriculture.

Co-author Dr Ghassem Asrar added: “We found total livestock CH4 emissions have increased the most in rapidly developing regions of Asia, Latin America and Africa. In contrast, emissions increased less in the US and Canada, and decreased slightly in western Europe. ”

UCD lecturer on climate change Dr Cara Augustenborg said she was not surprised by the findings. “We are constantly refining emissions models based on new information and generally most refinement indicates the situation is worse than we originally thought,” she said. “The authors seem to have new ways of determining how much methane a cow emits, which obviously has to be based on lots of assumptions since we simply can’t measure the methane coming out of every cow on the planet.”

It is known that agricultural emissions from animal-based agriculture are forecast to increase as the global population and demand for meat and dairy continue to rise, she said.

Ireland is pursuing a major expansion of its dairy herd under the Food Harvest 2020 and Food Wise 2025 programmes.

“It’s unfortunate that it looks like the situation may already be worse than we thought and with methane being 30 times more potent than the CO2 that comes from things like fossil fuels, it makes this finding even more serious,” Dr Augustenborg added.

“It makes it all the more urgent for Ireland to review our ‘sustainable intensification’ approach to agriculture. This report highlights that Government plans to keep growing the national herd are not sustainable, and it is reckless to bet the prosperity of rural Ireland on being able to do so indefinitely,” he said.

IFA environment committee chairman Thomas Cooney said greenhouse gas emissions for the farming sector had declined by 6 per cent since 1990.

“Despite this, overall national emissions have increased, with transport rising by 130 per cent since 1990,” he said, adding that Irish farmers were taking a leadership position in addressing the climate challenge.

“No other country in the world measures, monitors and manages carbon from farm to fork like Irish farmers,” he said.“Almost 90 per cent of the measures in Ireland’s rural development programme have climate-reducing elements.”

He urged caution on policy response to the study, which also shows increased agricultural emissions in developing countries.

“This is linked to increased food production in these regions. The Paris climate accord clearly states food production must not be impacted when addressing climate change,” Mr Cooney said.