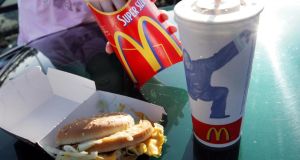 Fast food giant McDonald’s wants to be able to serve its Big Macs and its other famous meals until 3am every morning at its controversial Temple Bar outlet in Dublin.

In the face of some local opposition, the fast food firm is seeking planning permission to extend its opening hours to 3am at its Temple Bar Square outlet.

The company failed to secure the extension in an application to Dublin City Council after the council ruled that the extension would upset the balance of amenities in the immediate local area and negatively impact on residential amenity.

However, the US-owned firm has now appealed the decision to An Bord Pleanála where it argues that the restaurant “can play an important role in adding to the diversity of food and beverage options late at night”.

Dublin City Council refused planning permission after a number of local residents objected, including Vinny Hall, who told the council that the anti-social issues which drove the imposition of the midnight closing condition initially are still there.

Dublin City Fine Gael Cllr Kieran Binchy told the council in an objection that the area of Temple Bar must be balanced between the interests of cultural organisations, residential and commercial bodies.

However, in its appeal, consultants for McDonald’s argue “at night time, the primary use in Temple Bar is pubs and nightclubs, many of which operate until 3am with loud music and fully licensed bars. Therefore, how will the operation of a restaurant, which does not sell alcoholic beverages and does not play music, upset the balance of amenities in the area?”

The appeal states that the extension of the opening hours “can only improve the balance of amenities at night-time by increasing the quantum and diversity of establishments that do not sell alcohol”.

The appeal states: “In the interests of natural justice, it would appear wholly unfair not to allow the applicant to operate on a level playing field with nearby food and beverage providers.”

McDonald’s state that the works carried out to the exterior of the restaurant have significantly enhanced the character of the protected structure.

Consultants for McDonald’s submit that the late night operation of the restaurant with its substantial seating area could play a significant role in improving the noise environment of the local area by providing a facility for people to sit down and have a meal instead of congregating on the streets.

The fast food chain has offered that there be no take-out element between 12am and 3am.

The firm points out that it has 12 other outlets in Dublin, including two on O’Connell Street, that operate early morning services and has offered the appeals board the option of granting a three-year permission to its application to demonstrate that the operation of the restaurant will not compromise local amenity.

A decision is due on the appeal later this year.