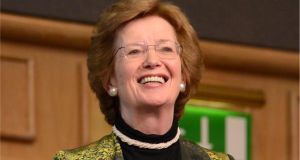 Mary Robinson: Her latest UN mandate will run until the crucial Paris climate summit in December next year, at which a comprehensive agreement on how to tackle global warming is expected to be reached. Photograph: Dara Mac Dónaill

She is to relinquish her previous appointment as UN special envoy for the Great Lakes region of Africa to focus on her new role in the run-up to a climate summit at the UN’s New York headquarters in late-September.

This gave the appointment a degree of urgency, given the number of heads of state or government expected to attend the summit, along with leaders of business and civil society worldwide.

Ms Robinson said she had “mixed emotions” about handing over her role in the Great Lakes region – which includes the Democratic Republic of Congo – but she had responded positively to the appointment because of Mr Ban’s focus on climate change.

She said she would continue as president of the Mary Robinson Foundation – Climate Justice, which emphasises the urgency of action from a “people’s perspective”.

Her latest UN mandate will run until the crucial Paris climate summit in December next year, at which a comprehensive agreement on how to tackle global warming is expected to be reached.