Local authorities, OPW and semi-states will be exempt from new vacant land levy 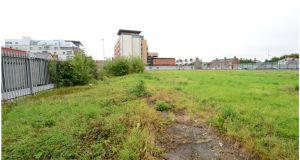 Derelict site on Cork Street near the junction with Ormond Street one of the derelict /vacant Dublin City Council sites in 2013. Photograph: Bryan O’Brien / THE IRISH TIMES

The Office of Public Works, local authorities, and bodies such as Irish Rail and RTÉ will be exempt from the new levy on vacant sites due to come into force next year, it has emerged.

Local authorities will have the power to impose an annual levy of 3 per cent, rising to 6 per cent, on the market value of unused land if its owner does not take steps to develop a site in an area designated and zoned under a city or county development plan.

Minister for the Environment Alan Kelly last month said all landowners who were leaving prime city and town centre sites dormant would be “treated the same”.

However, the heads of the planning Bill published by the Department of the Environment state the levy will only apply to the private sector and “the State, State agencies, semi-State bodies or local authorities” are exempt.

Dr Frances Ruane director of the Economic and Social Research Institute, who was a member of the taskforce that advised the Government on the introduction of the levy, said it was “disappointing” the levy was not being applied to all landowners.

Dr Ruane said that during the public consultation phase of the taskforce’s work developers and industry representatives had raised the concern that they were being unfairly targeted, and she had assured them this was not the case.

“I am disappointed. It is rational to include anybody who owns land in the levy. If you don’t put pressure on the assets of the State you don’t get a good return from them.”

Dublin city alone has more than 300 sites or 63 hectares of land zoned for development but left unused, some for decades. Some of the largest are owned by the State, including the site of the former Maguire and Paterson match factory on Church Street, bought by the Office of Public Works in 1999, and unused since. The city council itself is a substantial vacant landowner. A report on exactly how much of the vacant land is council owned is expected to be given to councillors next month.

The wording of the heads of the Bill would mean these lands would not be levied. It would also allow any lands owned by bodies such as Irish Rail, ESB, Dublin Bus, Dublin Port Company, CIÉ or RTÉ to escape the charge.

Unpaid levies on privately owned sites are a charge on the property, and remain owing for up to 12 years after they fall due, even if the site is sold.

The Bill will also enable local authorities to implement a “use it or lose it” policy in relation to planning permission.