‘Snapshot’ study on 3.5% of the Irish coastline regards erosion as greatest threat to shore 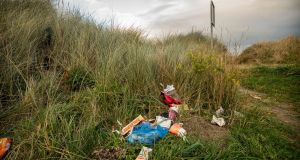 Preliminary results of a survey conducted has found that drink containers constitute the most widespread type of litter on the Irish coastline. Photograph: Joe O’Shaughnessy

A “snapshot” audit of the Irish coastline has found that recreational litter posed a greater threat to its health this year than water pollution.

Preliminary results of a survey conducted by environmental organisation Coastwatch has found that drink containers constitute the most widespread litter type, while abandoned tyres were the most frequent “large” refuse identified.

The “beachcomb” by more than 2,000 volunteers in October involved auditing 474 sites in the Republic and 45 sites in Northern Ireland – about 3.5 per cent of the 7,900km coastline.

Tyres were reported on about 27 per cent of the coast surveyed, in spite of recycling legislation. Some of the tyres may have been used as traps to catch peeler crabs, the survey notes.

Non-recyclable refuse, including household rubbish for landfill, was recorded in one in five sites.

While there was a “slight” reduction in household litter over previous years, fly-tipping of refuse in bags or sacks was higher – and recorded in about 10 per cent of survey areas.

Drinks containers were found in more than 90 per cent of surveyed sites, with more than 8,500 plastic drink bottles topping the poll. Counts tended to be higher on the southeast coast .

Surveyors also recorded almost 4,000 drink cans, distributed over 73 per cent of shores. Glass bottles were also found on almost 50 per cent of sites, and tetra packs were the “least frequent” type of container found.

A new “bottle lid”count introduced by Coastwatch last year yielded more than 4,500 lids on over 51 per cent of surveyed sites.

Sanitary waste was recorded on about 15 per cent of sites, while there were more than 1,000 plastic bags.

The plastic bag tax has been credited by Coastwatch with reducing this category to an average of one dumped bag per 200 metres of shore.

The survey also recorded abandoned fishing nets, and waste from both fish farms and anglers. There were fewer fish traps or pots washed up, due to the infrequent storms during the summer.

Erosion is still regarded as the greatest “threat to the shore”, and was reported in some 152 sites or over 29 per cent of total, Coastwatch Europe co-ordinator Karin Dubsky said.

She said that “recreational abuse” or litter was ranked second, at some 12.4 per cent of sites surveyed, for the first time, while water pollution was in third place at some nine per cent of locations.

The surveyors also recorded biodiversity, and noted there were more dead animals found this year, from seals to whales to a leather-backed turtle.

Jellyfish were reported on 16 per cent of locations – including the Portuguese man o’ war for the first time.

A blue-rayed limpet which feeds on several seaweed species was recorded for the first time in Dalkey, Co Dublin.

Ms Dubsky called for “systematic” action on marine refuse and noted that research by NUI Galway had shown how much litter marine organisms ingest.

Survey and training costs for the survey were subvented by the Department of the Environment water section and the results were published at a seminar in Trinity College, Dublin as part of the university’s “green week”.