Alarm raised by man on waterproof mobile phone off Sandymount beach at 10.40am 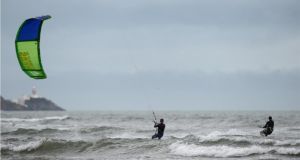 Kitesurfing in Dublin last year. A man who was kitesurfing with friends in breaking surf experienced difficulties today and had to be rescued. Photograph: Dara Mac Dónaill/The Irish Times

A kitesurfer has had to be rescued in Dublin today after getting in to difficulty in rough seas and 40km per hour winds.

The alarm was raised by the man on his waterproof mobile phone off Sandymount beach in Dublin at about 10.40am.

The Irish Coast Guard said he was up to 300 metres from the coastline and was caught in a riptide, which was pulling him away from shore, when rescued by Dún Laoghaire inshore lifeboat.

The man had been kitesurfing with friends in breaking surf when he experienced difficulties. He abandoned his equipment in an attempt to swim to safety, but could not because of the tide.

The RNLI said three volunteer crew members on board experienced heavy conditions at the harbour entrance due to the 25-knot (46km) southeasterly winds and building seas, the operational limits for the lifeboat.

The lifeboat hit breaking surf along the entire shoreline from Blackrock to Sandymount where the casualty was taken on board the lifeboat.

The man, who did not need medical treatment, was brought back to Dún Laoghaire shortly before noon.

Stephen Wynne, lifeboat operations manager with Dún Laoghaire RNLI, said: “Despite the conditions, this rescue demonstrated the capabilities of this small but highly effective lifeboat and its crew.

“Considerable skill is needed to avoid capsize while rescuing a casualty.”

People have been warned to stay away from the water during high tides and stormy conditions.

Elsewhere, a major search was called off for a jogger who was presumed to have been swept in to the harbour at Howth.

Air and sea rescue teams were launched when a concerned member of the public feared the man had gone off the west pier.

A coast guard spokesman said nothing was found during the operation and crews were satisfied the jogger left the pier safely after speaking to other people.